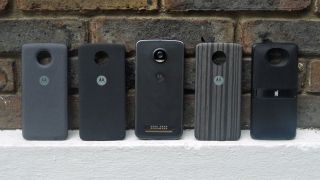 If you own a Moto Z phone or plan to buy one soon, you can buy Moto Mod add-ons safe in the knowledge they will also work with the third generation of flagship Moto Z phones.

A spokesperson told TechRadar, "Motorola has confirmed three generations of support for Moto Mods, so the next gen devices will support current mods".

That means when Motorola launches the next version of the Moto Z line - it may be called Moto Z3 or a variation of that - it will work with the JBL Soundboost 2, Hassleblad camera add-on or other Moto Mods you've already bought.

It means if you buy the new Moto Z2 Play or Z2 Force - or if you own the Moto Z, Z Play or Z Force - along with some Moto Mods you can be safe in the knowledge these will work again if you decide to upgrade your phone later.

The Moto Mods may also work with further phones from the company, but right now Motorola has only promised it will make the third Moto Z line phone compatible.