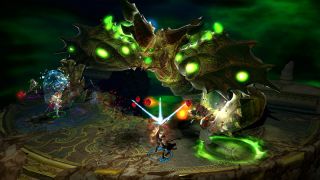 It’s been quite a journey for Diablo 3. After a rocky start on PC way back in May of 2012 that saw online server crashes and criticism of the series’ famed addictive loot cycle, the game was overhauled in time for a last-gen console version in 2013 and a current-gen release on Xbox One and PS4 in 2014. Two excellent expansion packs and a host of game-improving tweaks later, Diablo 3 is not only a contender for the title of the greatest dungeon crawler of all time, but, somehow, it’s now portable, too.

Yep, Nintendo’s wonder console, the Nintendo Switch, has done it again, with developer Blizzard cramming every improvement and piece of added content into this handheld version of the game.

It not only works, but looks and plays amazingly too – and that’s before you consider just how well suited the Diablo formula is to on-the-go play.

If you’ve played Diablo 3 in any of its former incarnations, you’ll know what to expect here. If not, you’re in for a treat – Diablo 3 meets a perfect balance between simplicity and depth, with an addictive loot system that upgrades your characters powers, leaving you begging for a few more hours play.

Whether you’re getting up close and personal as a hammer-wielding Barbarian, or attacking from afar as a mystic magic-wielding Witch Doctor, Diablo 3 tasks you with picking from one of several classes and exploring randomly generated dungeons. Filled with Hell’s armies, you’ll take on countless enemies, each with a chance of dropping more powerful gear to help you progress through the game.

It’s incredibly addictive, and equally satisfying to see your hero progress from loincloth-wearing warrior to golden-armoured saviour of the fantasy medieval world. It’s a game that offers incredible replay value too, with high-level challenge runs yielding greater gains once the main game has been beaten, season modes with rewards for regular players and a superb multiplayer mode (both online and local) that will bring you back to the glory couch-co-op days of Golden Axe.

What’s particularly nice about this package is that it’s the complete Diablo 3 experience – you’re getting all the content that comes in the latest Eternal Collection of the game (which includes the excellent Reaper of Souls and Rise of the Necromancer expansion packs), as well as Nintendo-exclusive features such as Amiibo support and Zelda-baddie Ganondorf armour set. There’s hundreds of hours of play to be had here.

The Nintendo Switch version of the game more or less mirrors the control scheme you’ve come to expect from the PS4 and Xbox editions of the game. It’s far more action-oriented than the PC edition, with the left stick giving you direct control of your hero, and the right stick offering a dodge move.

Then it’s a matter of assigning skills and special moves to the buttons, while there’s a really handy quick-equip button assigned to the up D-Pad button, letting you scroll through your most recently collected loot and start using it without jumping into the menus.

It may be heresy to say so, but I personally think I prefer this to the classic mouse-and-keyboard control scheme. It makes all the play more immediate, whereas the constant clicking on the PC made me at times feel a bit removed from the action.

The intimacy of playing on the go, whether in bed or on the toilet, with the Switch only enhances this feeling, while Diablo is also surprisingly well suited to short bursts of play. It’s perfect for a commute – get ten minutes of slaying under your belt, find a new legendary weapon, put it to sleep and pick up exactly where you left off at lunch.

Whether you’re playing in portable mode or docked with a TV, Diablo 3 for Switch never creaked under the strain of hundreds of enemies onscreen at once, multiple powers being activated and several heroes running amok. Running at native 720p in handheld mode and 960p when docked, it looks very attractive despite the port to a relatively low powered console, retaining a solid frame rate and only seeing the character models lose a little smoothness. A single system-freezing crash was a unique and one-off complaint to be endured.

Diablo 3 has evolved into one of the greatest games of its genre, and the added portable factor here arguably makes this the best version to pick up, so long as you’re not a mouse-and-keyboard PC purist.

A one-off crash aside, it’s only the drain on the Switch’s battery that Diablo 3 draws which can be considered a negative here, but that speaks volumes about the game itself – you’ll want to do battle against the undead legions long after your Switch’s power pack has breathed its last.