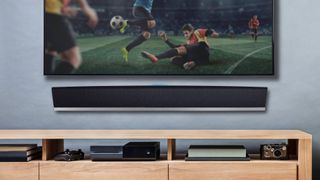 If you're in the market for a new soundbar, and you have a little money to spend, you might be interested in the latest premium soundbar models that have just been announced by audio brand, Denon.

The DHT-S516H and DHT-S716H are designed to take over from your TV's puny speakers, making your home cinema setup truly immersive; whether you're watching sports, playing video games, or streaming your favorite Netflix shows.

You don't have to limit yourself to your living room though – both soundbars can be controlled by your voice and support the latest version of Denon's HEOS multi-room system. This means, if you have another Denon HEOS speaker, you can hook it up to the soundbars over your home Wi-Fi network, and play continuous music in every room of your house.

Tidal users will be pleased to know that the soundbars support Hi-Res Audio, as well as Dolby Digital, DTS, AirPlay 2, and Bluetooth connectivity. Connection-wise, you have an HDMI with ARC, optical, and 3.5mm inputs.

If you want to take it up a notch, the DHT-S716H also comes with DolbyTrueHD and DTS-HD Master Audio decoding, HDR support, and Dolby Vision; at $899 / £799 (around AU$1450), it's pretty pricey, but it's certainly feature-rich.

You can also hook it up to an optional wireless subwoofer, which will set you back an additional $599 / £599 (around AU$1080) – or if you really want to beef up your home cinema, you can even build a 5.1 system around the premium soundbar, using other wireless HEOS speakers.

Of course, that could get really expensive – but who are we to put a price on truly immersive cinematic sound?