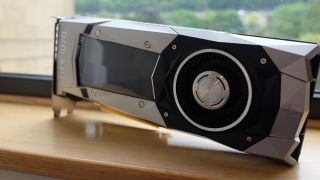 Good news for those who have been unable to contain their excitement at getting their mitts on a GeForce GTX 1070 graphics card – you can now grab one of these temptingly priced pixel pushers online.

The GTX 1070 is on sale as of now and is a more affordable slice of Pascal-powered graphics goodness compared to its bigger brother the 1080.

You'll be able to grab the card at the usual major component retailers including the likes of Scan, Ebuyer and Overclockers – the latter of which already has an EVGA GTX 1070 Founder's Edition 8GB available priced at £410.

If you're on the hunt for a GTX 1070 and want to assess all your options, a good place to start is Nvidia's UK store, which will point you in the right direction in terms of available stock across retailers.

If you're interested in the exact differences between the two cards, and why you're paying a couple of hundred quid more for the top dog model, then check out our Nvidia GTX 1080 vs GTX 1070 feature. The long and short of it is, though, that the 1070 is an absolute beast in terms of bang for your buck.