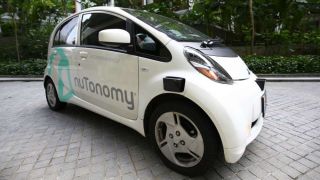 Starting today, residents of Singapore will be able to take a taxi ride in a self-driving car.

Various companies, including Google, Volvo and Tesla, have been experimenting for some years with self-driving vehicles. Uber plans to begin offering self-driving taxi rides in Pittsburgh in a few weeks' time.

Earlier this year, there were trials in Japan. But this new scheme is operated by a relatively-unknown autonomous vehicle software startup called nuTonomy.

nuTonomy was founded in 2013 by a pair of researchers from MIT, and began testing its software in Singapore earlier this year. Singapore, the company says, is ideal because it has good weather, good infrastructure, and drivers that tend to obey traffic rules.

The firm has modified a collection of Renault Zoe and Mitsubishi i-MiEV electric vehicles, fitting them out with six sets of Lidar, and two cameras on the dashboard. A driver will be seated in the front of the car, ready to take control if anything goes wrong.

So far the fleet is small - just six cars, rising to 12 by the end of the year. They'll also only run within a 2.5-square-mile business and residential district and pick up and drop off only at specified locations.

Oh, and you'll need an invite to use it, too - so it's not really open to the public. But on the bright side, it's free for the time being and nuTonomy promises to add more pick-up and drop-off points over time.

A Lot Of Possibilities

By 2018, nuTonomy says that it hopes that the entire taxi fleet of Singapore will be self-driving, decreasing traffic on the city's crowded roads. At the same time, nuTonomy is working on beginning similar tests in other Asian cities, as well as the US and Europe.

"When you are able to take that many cars off the road, it creates a lot of possibilities. You can create smaller roads, you can create much smaller car parks," Doug Parker, nuTonomy's COO, told the Associated Press. "I think it will change how people interact with the city going forward."