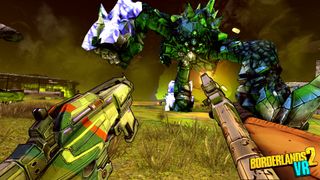 Hunting loot and weapons on the alien planet of Pandora, and in virtual reality no less - what else could you possible want for Christmas?

Gearbox Software has announced the VR port of its 2012 critically acclaimed open-world shooter, Borderlands 2, which is coming to PlayStation VR on December 14.

Players can choose any of the four main character classes from the mainline game - Siren, Commando, Gunzerker, or Assassin - and immerse themselves in the game's colorful alien world as they hunt for for money, giant guns, and countless punchlines from the game's joke-a-dozen NPC cast.

Players who pre-order before the December 14 launch date will also get access to a PlayStation theme featuring the game's four main characters - but check out the immersive action on offer in the trailer below.

Borderlands 2 was an explosively fun sequel that built on the charming art style and winning humor of the original 2009 game, and its move into VR is just the latest AAA game to find a workable way of porting to the requirements of PSVR, HTC Vive, or Oculus hardware.

It joins the likes of Bethesda's Doom or Fallout 4, both of which showed the possibilities of FPS action and open-world exploration in a virtual space. The tricky navigation problems of VR have come a long way in the past few years, even if the point-and-click teleport mechanic used as a workaround can't match the fluidity of normal console play.

Borderlands 2 VR hopes to aid that with a new slow-mo feature called BAMF Time (Bad Ass Mega Fun Time, if you couldn't tell) that will slow own the action in battle, making it somewhat easier to gun down chainsaw-wielding assailants.

We instinctively shuddered at the thought of navigating the game's weapon and loud-out menus with VR motion controls, but we're keeping an open mind for now.