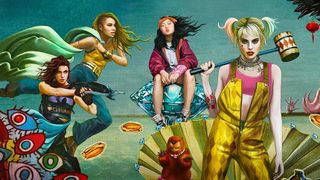 The world premiere for Birds of Prey was last night, and the first reactions to the DC Comics adaptation are now hitting social media. The overall response to the Suicide Squad spin-off starring Margot Robbie as Harley Quinn seems really positive, with praise for the movie's action, cast and choice of tone.

First reactions don't necessarily represent the eventual consensus around a film – just look at the reactions to The Rise of Skywalker after its premiere, some of which sound like they're about an entirely different movie – but they're a decent indicator of what to expect. The whole phenomenon of first reactions has been parodied extensively by Ben Mekler on Twitter.

With that in mind, the responses to Birds of Prey are promising, and this movie is almost certainly going to be better than Suicide Squad by default. So let's get into them.

First up, we've got kind words for the ensemble cast of the movie, which includes Mary Elizabeth Winstead as Huntress, Jurnee Smollett-Bell as Black Canary and Ella Jay Basco as Cassandra Cain (the second Batgirl in the comics). The movie's villain, Black Mask, is played by Ewan McGregor.

So #BirdsofPrey was an absolute blast. Harley feels exactly like the human Looney Toon she ought to be, Black Mask is a scene stealer; Dinah, Helena, Cass, and Renee all rule. This was everything I want from DC movies and then some.January 29, 2020

Then we've got some favorable comparisons to 2019's Shazam!, which was largely praised for being a different and fun take on a superhero movie. It was more fun than Justice League was, anyway.

Just saw #BirdsofPrey and am happy to report that it's my favorite modern DC movie yet. Like Shazam, it carves its own path with totally unique aesthetic, action, and tone. Margot, Ewan and all the rest are 100% fantabulous. Why aren't there more roller skate action scenes?? pic.twitter.com/BDipKiB0qUJanuary 29, 2020

"A criminally fun celebration of sisterhood," is how writer Millicent Thomas puts it. There are a few comparisons to Deadpool, too, in terms of the movie's cheeky tone and fourth wall-breaking.

The only fair comparison for #BirdsOfPrey, if you want one, is Deadpool. They have a lot in common, especially their use of fourth-wall breaking and R-Ratings! pic.twitter.com/yGemqvJmMaJanuary 29, 2020

Then we have some "awkward plotting" called out in Birds of Prey, but amid overall praise for the movie.

#BirdsofPrey is KILLER. A slow start and awkward plotting doesn’t stop the movie, and these characters, from soaring in the end. Wildly violent, F bombs out the wazoo, and the best bat fight scene since The Raid 2. If Margot Robbie could control this part of the DCEU, she should. pic.twitter.com/bewnj8npaJJanuary 29, 2020

Birds of Prey, directed by Cathy Yan, will be released on February 7. It's the first of two DC Comics adaptations coming this year, with the other, Wonder Woman 1984, coming on June 5. Margot Robbie will next appear as Harley Quinn in 2021's The Suicide Squad, directed by Guardians of the Galaxy's James Gunn.