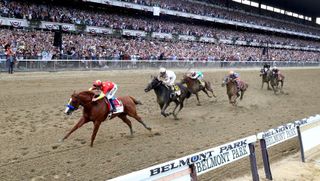 After a controversial Kentucky Derby which saw its first ever disqualification and a Preakness Stakes where a horse ran the race without a jockey, the Triple Crown comes to an today with the Test of the Champion. You're in the right place to see how to get a 2019 Belmont Stakes live stream.

The Belmont Stakes is an American Grade 1 Thoroughbred race featuring 3-year-old Thoroughbreds run on a 1.5 mile (2,400m) track. The 'Run for the Carnations', which is held five weeks after the Kentucky Derby and three weeks after the Preakness, is the oldest of the three Triple Crown races and dates back to 1867.

Belmont Stakes - where and when?

The Belmont Stakes is the third and final race of the American Triple Crown and the event is held annually at Belmont Park in Elmont, New York. The 1.5 mile (2,400m) race will be held this Saturday, June 8th.

Last year’s Belmont Stakes was a race to remember as Justify became the 13th horse to win the Triple Crown. Unfortunately, there will be no possibility of a Triple Crown winner this year but the 2019 Belmont Stakes is still shaping up to be an interesting race nonetheless.

War of Will is aiming to become the 12th horse ever to win both the Preakness and Belmont after failing to win the Kentucky Derby while third-place Kentucky Derby finisher Tacitus is another clear favorite.

Whether you’re rooting for War of Will, Tacitus or any of the other 10 horses competing in today’s race, we’ll show you how to live stream the Belmont Stakes from anywhere in the world.

How to watch the Belmont Stakes 2019: US live stream

If you’re in the US and want to watch the Belmont Stakes on TV this Saturday, then NBC has you covered. The network will begin its pre-race coverage of the event at 2.30pm ET, 11.30am PT on NBCSN.

The main event will be aired on NBC starting at 4pm ET, though you can also stream the race live on NBC TV or via the NBC Sports app.

If you happen to be outside of the US this weekend and want to access the NBC US live stream, the we recommend using a VPN - scroll down to read more about that option.

How to watch in the US without cable

If you don't have a cable subscription, fear not, because there are other options that will allow you to watch NBC without having to subscribe to it. To make the entire process simple for you, we've listed three of our favorite options below:

If you're away from the US this weekend and try to watch the Belmont Stakes coverage online, you'll soon find you can't. Broadcasters geo-block evens like this so you can only watch them with a stateside IP address. That's where getting a US VPN comes in.

Virtual Private Networks allow you to effectively change the IP address of your laptop or mobile to one in another country. So you can make it look like your back in the USA (or Canada or the UK or anywhere else for that matter). They also give you an extra layer of protection online.

We've tested all of the major VPN services and we rate ExpressVPN as the absolute best. It's compatible with loads of devices (e.g. Apple, Android, Amazon Fire TV Stick, Apple TV, Xbox, PS4) and streaming services and is up there with the fastest and most secure. You can read more in our ExpressVPN review or see it topping our best VPN chart:

Get ExpressVPN for the best all-round VPN for streaming. It comes with a 30-day money back guarantee. And if you sign up for its annual plan, TechRadar readers get 3 months absolutely FREE.

How to watch the Belmont Stakes 2019: Canada live stream

Canadian horse racing fans with a cable subscription will be able to watch this year’s Belmont Stakes on TSN. The network’s coverage will begin with the Belmont Stakes Prep at 3:40pm ET on TSN5 with the main event set to start at 4pm ET.

How to watch the The Belmont Stakes 2019: UK live stream

Trying to watch this year’s Belmont Stakes in the UK? Well lucky for you, Sky Sports will be showing the full race this year beginning at 9.15pm BST. If you’re not a Sky Sports subscribe already and just want to watch Saturday’s race, NowTV has you covered with a Day Pass for just £8.99.

Travelling outside the UK this weekend? Don't worry as you can also use a VPN to watch the races on any of the streaming services that give you access to the coverage.