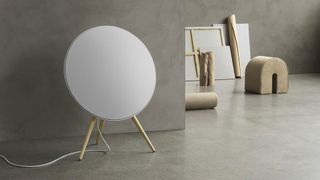 It's one of the most instantly recognisable speakers out there, and it's all set for a thorough refresh – Bang and Olufsen's Beoplay A9 speaker is getting re-released, and it's bringing with it some new connected smarts, too.

First launched in 2012, the speaker drew lustful stares for its mad satellite dish-like design, at home either on a three-pronged stand, or hung from a wall.

Not that it's all about connectivity – a few tweaks have been made to the audio drivers and external design of the moon-shaped speaker.

Two new full range drivers have been added to the rear of the Beoplay A9, for a total of seven drivers. This should lead to a richer and wider soundstage, with a new active room compensation system tuning the speaker's output based on its surroundings.

Finally, the power cord has been given a fabric covering to match the front face. The unit will be available in white with oak legs styles, a black with black walnut legs version, and brass and bronze shade limited editions.