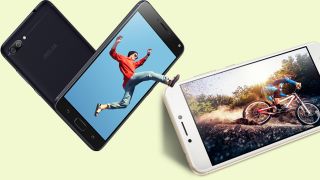 Asus promises to surprise you with the ZenFone 4 Max on August 19, but spoiler alert, it's already shown off the Android phone on its own website 19 days early.

Looking similar to last year’s Asus Zenfone 3 Zoom, the midrange smartphone sports a 13MP dual-lens rear-facing camera array – a feature that has spiked in popularity in the past year. In place of the Zoom’s optical zooming ability, Asus has gone with a wide-angle lens that’s capable of 120-degrees of view compared to 82-degrees found in the Zoom.

The phone doesn’t try anything new for Asus design-wise, though moving its fingerprint sensor from rear to the front is a notable change. Otherwise, this phone seems to be stocked with the usual suspects, like a 3.5mm headphone jack and a USB-C charging port.

This is the “Max” version?

We’re saving judgment until we give it a try, but the specs listed for the Zenfone 4 Max appear to be pretty ho-hum. Of course, that hangs heavily on the final price tag. If this device is sub-$250, that’s more convincing story.

The obvious stand-out in the spec sheet is its 5,000mAh battery, which considering its thin frame is a marvel of engineering. This huge battery powers the efficient Snapdragon 430 with 3GB of RAM.

Topping it off is the 5.5-inch IPS panel. Asus’ website claims that it’s “HD”, so that could mean 720p or 1080p. Either way, the battery inside really could last for days with these specs.

Lastly, Android 7.1.1 Nougat comes built-in with the new ZenUI 4.0. Before you get up in arms, you should know that it’s almost unrecognizable to Asus’ software of old–in a good way. It got rid of nearly all bloatware, leaving less between you and that stock Android goodness.

We’ll know more about the Zenfone 4 Max soon and hopefully with that, more on what else Asus has planned for the Zenfone 4 lineup, too. Though, if this is the “Max” version of the phone, can users expect much in the way of performance out of the brand’s core Zenfone 4? August 19 is just around the corner, so we’ve not long to find out.