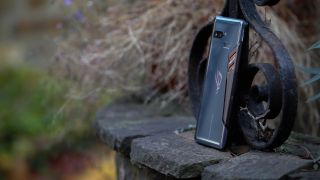 We've heard a new Asus ROG Phone will launch in July, and now Asus has confirmed that, as well as naming a big new feature for the gamer-oriented handset.

In a post advertising the company's partnership with Tencent Games, of PlayerUnknown's BattleGrounds fame, and showing off a new fighting game Under the One Man, Asus confirmed the name Asus ROG Phone 2 (albeit in Chinese) and advertised that it'd come with a 120Hz screen.

A 120Hz display means the screen refreshes with new images 120 times per second, which is useful for various functions, particularly gaming, where quick reflexes and responses can be useful in competitive situations.

The Asus ROG Phone 2 having a 120Hz refresh rate makes it competitive with the Razer Phone and Razer Phone 2, which are currently the only smartphones able to boast that particular spec.

Gaming handsets are a competitive niche market – as well as the Asus ROG Phone and Razer Phone series, the Black Shark 2 just launched, and so Asus adding a 120Hz screen to its phone is an important way of it standing above the competition.

We don't know much about the Asus ROG Phone other than its 120Hz screen, but we're expecting to see it release in July based on the release of the original ROG Phone. Stay tuned to TechRadar when that happens to find out if it's the ultimate gaming phone.