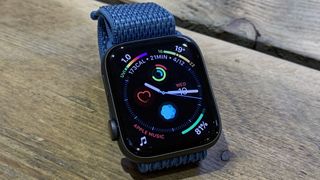 However, there are a number of differences between them. So to help you make the right choice we’ve compared Apple’s two latest wearables across all the categories that matter, so you can see what’s the same, what’s different, and how much you’re going to have to pay for each.

However, they’re both OLED screens and have the same maximum brightness. Both watches are also waterproof to depths of 50 meters.

The biggest difference in fitness features between these two wearables is that the Apple Watch 4 has an ECG (electrocardiogram). This allows it to monitor for atrial fibrillation. It’s not available everywhere, but you can use it in the US and the UK.

The other features are mostly similar. Both watches have GPS and come in optional LTE varieties. Both also include a full range of exercise tracking skills, including swim tracking. They’re arguably still not quite as good for fitness as a dedicated sports watch, but they come close.

As for battery, Apple doesn’t reveal the sizes, but has said to expect up to 18 hours of use from each.

In practice we found that this is a conservative estimate for both watches, as they both easily last over a day in general. If you’re not a heavy user you could even get two days out of them, but there’s not much difference in life between the two.

So far, the Apple Watch 4 has come out on top as you’d expect, but it’s the price that might make you look to the older model.

While these are both great smartwatches there are some clear upgrades on the Apple Watch 4. Mostly notably the ECG feature, the newer chipset and the bigger screen.

But it’s also a substantially more expensive device, so if those things – and the numerous smaller upgrades – don’t matter to you, then the Apple Watch 3 is a great cheaper option.

But if you do care about those upgrades or simply want the best Apple Watch available, then the Apple Watch 4 is the clear choice.