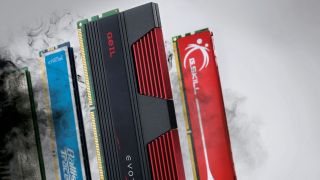 According to new research from memory specialists Crucial, a quarter of folks in the UK have a PC which has reached what the firm calls the ‘memory cliff’ – the point where the computer is hugely slowed down, or completely falls over, crashing down onto the rocky crags below.

To be precise, Crucial’s survey found that 24% of Brits have a machine on the memory precipice, the specific definition of which is the point where the PC “is at risk of falling into the danger zone and slowing down drastically”.

While Crucial's number deal with UK machines, it's likely there's a similar pattern worldwide. Crucial's warnings - and advice - about the memory cliff and how to avoid it, are also relevant no matter where you live.

Crucial has made a handy diagram showing exactly where the danger areas lie depending on the PC’s amount of system memory, which you can check out below.

The essence of the findings is that computers with smaller amounts of RAM get bogged down quicker, as every megabyte of memory used by a program represents a bigger slice of the machine’s total capacity (not forgetting that system overheads will have a bigger impact on a smaller amount of RAM for the same reason).

So those with a PC that has only 2GB of RAM will find they hit slowdowns when 60% of system memory is being used, and at the 80% level, the computer is in danger of being overwhelmed and freezing or falling over.

If you’ve got 4GB of RAM slowdowns don’t start until the 70% memory usage level, and with 8GB, sluggishness doesn’t manifest until 80%, according to Crucial’s workings-out as presented below.

The company further noted that 62% of the folks surveyed had 8GB or less system memory installed. Although unfortunately figures weren’t provided for those with 4GB or less, who are more likely to struggle.

To see the total amount of memory your Windows PC is currently using, all you have to do is head to the Task Manager. Simply press the Ctrl-Alt-Delete keys together, and then click on Task Manager – look at the memory column to see the percentage used at the top, and the memory usage of individual apps is listed below.

The more apps you have open, the more memory is gobbled up. Using the Task Manager, however, helps you to see if any particular program is using up a ton of memory, so you can then close the offending app and hopefully see your computer go back to running smoothly.

If you’re having trouble closing down a program because it’s frozen, Task Manager lets you hard-close the app in question simply by selecting it and clicking End Task (bottom-right).

(Incidentally, Mac owners can check their memory usage via the Finder app – head there and click on Applications, Utilities, then Activity Monitor.)

Of course, Crucial sells memory, so it’s hardly surprising that the firm advises upgrading your RAM if slowdown gremlins are rearing their ugly heads. But obviously, this is a good point regardless of any not-so-hidden agenda – particularly if you can see that your memory usage is spiking really high.

And should you want to bolster your system memory, we’ve got an article right here which covers everything you need to know about upgrading your RAM.