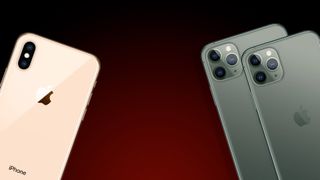 There's no denying Black Friday is the best time to buy tech. You usually see some better deals than in the January sales, or during Amazon’s newer Prime Day extravaganza.

What iPhone deals can we expect this year? Our crystal ball runs on AA batteries so we can’t guarantee our predictions will be 100 percent on point, but years of covering every Black Friday deal worth a click has given us insight that could give a deal-predicting AI a run for its money.

Old iPhones or new ones? Cashback or straight-ahead money off? Will they land on the day or weeks before? Here’s what you can expect from iPhone deals this Black Friday.

One part US shoppers will need to get their head around is “qualified activation”, a term tied to just about every iPhone deal from the big retailers. This means you end up buying the phone on a carrier’s (usually two-year) finance plan, either with a new line or on your existing account.

Amazon is usually the first stop for Black Friday deal hunters, but that shouldn't be the case if you want an iPhone. There were no billboard worthy iPhone savings from Amazon last year in the US, and we expect the same in 2019.

However, you may find the odd refurbished bargain among its Lightning deals.

UK buyers had a little more luck, as the iPhone X went on sale for £779. However, this was likely a response to other retailers dropping their prices. If you see a legit iPhone price drop this year, it’s likely just matching another site’s price.

The biggest retailer in the US, Walmart, advertises a great iPhone deal each Black Friday. Last year it offered a $300 gift card with a purchase of the new models. At the time this included the iPhone XS, iPhone XS Max and the iPhone XR.

You got even more “free cash” if you bought one of the older models, the iPhone 8, iPhone 8 Plus or X. They came with a $400 gift card. Walmart was really keen to clear out that older stock.

We expect to see something similar this year, although if Walmart has been a little smarter with its stocks of the discontinued iPhones that old hardware bump may disappear. That said, the retailer continues to sell the iPhone XS and XS Max so you could be in for a big chunk of store credit if one of the phones no longer sold by Apple directly will suit.

These were all contingent on you activating the phone with AT&T, Sprint or Verizon.

If you’re not normally a Walmart shopper you’ll likely be able to get a reduction instead of a gift card, but it’s probably going to be in the $150 range, not $400.

Walmart tends to publish its Black Friday advert, which will have the full details, around three weeks before the big day (November 29). And if this year rolls out like the last, you’ll have to head to a store on the day to get these discounts. Prepare for carnage.

There’s one big question for Target’s Black Friday iPhone deals this year. Will it match Walmart?

Last year Target offered a $250 gift card with the purchase and qualified activation of an iPhone, $50 below Walmart. Target has had a great year, adding Amazon-rivaling same-day delivery to its list of benefits. But we would not be surprised if Target bowed out of this fight and once again offers just slightly lower credit bonuses than Walmart.

Unlike Walmart, Target’s gift cards for the older phones were lower last year, at $150. Maybe it didn’t over-order those iPhone models.

Last year it offered $200 off the then-discontinued iPhone X and $150 off the newer models. These were among the very best straight iPhone discounts, and we hope Best Buy will come up with the goods again this year.

We say “straight” discounts, but these were still subject to activation, whereby you pay for the handset through your carrier’s financing plans.

Last year’s best UK iPhone deals were more-or-less matched across John Lewis, Argos and Very. All three sold the iPhone X, with just a £20 difference in pricing. John Lewis and Argos pitched it at £799, Very at £779.

What does this tell us? We may get a chance to snag one of last year’s models at a lower price this year. There’s a lot of scope for this too.

All three stores still sell the iPhone XS and iPhone XS Max, which are no longer available directly from Apple. We would not be too surprised to see up to £200 off these phones, which would make them a great alternative to an iPhone XR — if not a match in price. That iPhone XR, it’s a pretty sweet deal.

We may see an iPhone XS for £749-799. John Lewis also took £50 off the iPhone 6S. It still sells that phone, the iPhone 7 and iPhone 8 ranges, so we may well see minor discounts on some truly ancient iPhones.

What about the Apple Store? As you can probably tell from its position in this article, Apple doesn’t go big on Black Friday, not least because it doesn’t like short-term price drops of its phones.

However, the draw of all that cash sloshing around is too much even for Apple. Last year it offered Apple Store gift card credit for any purchases of its non-refurb hardware bar the newest stuff. In the US you could get $50 for older-gen iPhones, or £40 in the UK. We’re likely to see similar gift card bonuses again this year, given it did the same in 2017.

The real answer to where you should look for Black Friday iPhones deals is, of course, TechRadar.

We'll be putting together all of the iPhone deals we recommend from trusted retailers over the Black Friday period into the articles below so be sure to bookmark them and head back on November 29.