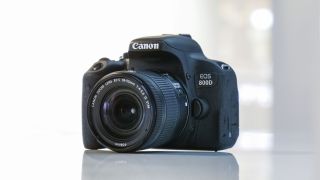 We haven't finished digesting the leaks and rumors about the Canon EOS R5 and the EOS R6 full-frame mirrorless cameras, but now there's already more to take in. This time it's about Canon's next DSLR, which is slated to be the EOS 850D (to be called the Rebel T8i in North America).

According to reliable camera news source Nokishita, Canon has added three more items to its products list, including the upcoming DSLR that is expected to make its official debut in February at the CP+ photography trade show (presumably alongside the EOS R5).

Translated, that tweet reads, "EOS Rebel T8i Body, EOS Rebel T8i Lens Kit, RF 24-105mm STM, and QX10 (Black, White, Green, Pink) have been added to Canon’s latest product list. If not a mistake, it should be announced in February." Exactly what the QX10 refers to is unclear but Canon is definitely populating its stable of RF optics with another standard zoom lens.

Not long after that tweet was published, images and specifications of the upcoming DSLR have leaked online, giving us a closer look at the snapper set to replace the current EOS 800D/Rebel T7i – a camera that, after almost three years on shelves, is still a darn good entry-level DSLR.

If there's any truth to the specs list published on Canon Watch, the EOS 850D will have a 24.1MP CMOS sensor – which is, strangely, a marginal downgrade from the EOS 800D's 24.2MP option – with the same 45-point cross-type AF system.

However, the upcoming camera will have the power of the Digic 8 imaging engine under the hood (the same one used in the EOS 90D and EOS M6 Mark II launched in 2019), giving it a pretty generous performance boost over its predecessor.

Unlike the EOS 90D, though, maximum burst speed is rumored to be 7fps (or 7.5fps when using Live View) – a single frame more than the 800D but significantly less than the 90D's 11fps. That said, for an entry-level camera, that's not too shabby at all.

The Digic 8 processor will give the upcoming shooter the ability to capture 4K/30p footage (800D can only shoot 1080p) while utilizing the entire width of the sensor. That means there's not going to be any extra crop outside of the standard 1.6x crop you get from any Canon APS-C body. If true, that's a marked improvement over the EOS M50 mirrorless camera, which knocks this back to a 2.5x crop when shooting 4K video.

Going by the leaked images, the 850D resembles its predecessor physically, including the 3-inch vari-angle touchscreen that, Canon Watch says shares the same 1.04 million dot resolution as the current model. However, it seems Canon has managed to shave some weight off the upgraded iteration which will weigh 515g compared to the 532g 800D.

Not much else has been revealed yet, but if Nokishita is on the money with the release date, there's not long to go before we hear all about it straight from Canon.