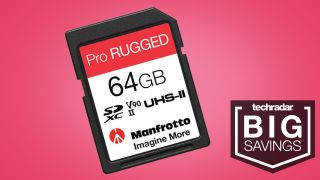 SD cards can sometimes leave you feeling a little unnerved with their fragility and aversion to water, but that's not the case with Manfrotto's new Pro Rugged range. Not only are they tough and waterproof, these new SD cards are an impressive 50% off until the end of January.

The new Pro Rugged line, which also includes microSD and CompactFlash cards, is Manfrotto's debut in the memory card world. The Italian company is better known for accessories like tripods, but has decided to use its heritage to take on SD cards from the likes of Sony and SanDisk.

What's so special about the Pro Rugged range? Aside from being 50% off at launch, Manfrotto claims they're the "strongest memory cards around", with a design that makes them three times stronger than a standard SD card, and able to withstand 20kg of impact. The good news for anyone who's accidentally put their SD card through a hot wash is that the SD and microSD cards are also apparently waterproof for up to 72 hours.

While that might sound tempting, the Pro Rugged cards are probably overkill for point-and-shoot photography. With its SD card managing read speeds of 280MB/s and equally impressive write speeds of 250MB/s, they're very much designed for those who are shooting 4K/6K video or fans of high-speed raw snapping.

Manfrotto Pro Rugged 64GB SD card: $57.50 at Manfrotto
These new rugged, waterproof SD cards are a real bargain at their 50% off launch price. With blisteringly fast read/write speeds of 280/250MB/s and the ability to withstand up to 20kg of force, they're a great, future-proofed option for cameras with UHS-II slots.View Deal

Both claim similar levels of toughness, with full waterproofing and the ability to withstand extremes of temperature from -25°C to 85°C. Sony makes additional claims about its Tough line's bend-proofing, stating that they're 18 times more resistant to bending than standard cards.

And while Sony's Tough SF-G aren't available in microSD form, its SD cards offer slightly superior speeds to the new Manfrotto Pro Rugged cards, with the ability to read data at 300MB/s and write at an incredible 299MB/s.

But with their 50% off launch price, Manfrotto's Pro Rugged cards offer far better value right now, with their Sony equivalents costing well over twice as much for both the 64GB and 128GB versions. If you need a speedy card that'll survive both the wilderness and the washing machine, they're a great buy right now.