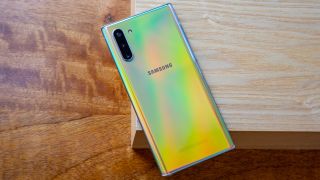 Samsung will be adding new budget-friendly models to its flagship lineup, consisting of the Galaxy S10 Lite and the Galaxy Note10 Lite.

News recently surfaced that Samsung will be introducing additional Lite variants of its 2019 flagships, with slightly lower specifications and presumably a lower price tag. The leaked designs also indicated a new design language that we are likely to see on the Samsung Galaxy S11.

A new report from 91mobiles states that the Samsung Galaxy S10 Lite and the Galaxy Note10 Lite will launch in India in mid-January. These devices were slated to be unveiled in December itself alongside the A51, but that seems to no longer be the case.

The Samsung Galaxy S10 Lite is expected to have a punch-hole Infinity-O display on the front, spanning 6.69-inches diagonally. The cameras will now be placed on a bigger island on the back and will house at least three sensors, including a 48MP primary shooter. On the inside, it will be powered by the Snapdragon 855 chipset. Rumors suggest that 45W fast charging will also make the cut.

As for the Samsung Galaxy Note10 Lite, renders suggest a similar Infinity-O display on the front. Still, the cameras will instead be placed in a square enclosure (identical to the iPhone 11). The S-Pen will be a big part of the experience, but the processor at heart is rumored to be the Exynos 9810, which will be two generations old when it comes.

Budget flagships are popular in price-sensitive markets such as India, and it seems like that is what Samsung has on the mind.