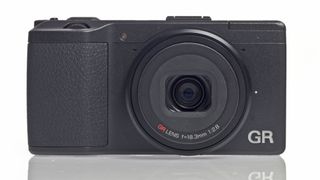 The ultra-premium compact camera market is starting to get crowded. Just a few short weeks after the launch of the Nikon Coolpix A, Pentax Ricoh has launched its own large sensored compact camera. The Ricoh GR also features a 16.2 million-pixel APS-C sized sensor, but how else does it compare with the A... and which one should you fork out your hard earned cash for?

Take a look with our head-to-head comparison.

Both the Ricoh and the Nikon feature the same resolution (16.2 million pixel) APS-C format CMOS sensors, so in this respect there's very little to differentiate between the two. Both have also had the anti-aliasing filter removed, which should help them produce sharper shots.

The Nikon sensor is not a new sensor however, as its previously been used in the D7000, which is over two years old. Alternatively, Pentax says that the Ricoh GR's sensor is a new design, which is almost nine times larger than the sensor found on the Ricoh GR IV.The lens and sensor have also been deigned to work together.

Just as the Coolpix A uses the same sensor as the D7000, it also uses the same Expeed 2 processor. This facilitates high ISO shooting as well as full HD video recording. Again, Pentax says that the GR Engine V on board the GR has been newly developed. This promises to deliver reduced noise at high sensitivity and has apparently been optimised for the low-pass filterless design.

As the Nikon Coolpix A is a little older, we've already had the opportunity to put it through our labs tests and seen that it puts in a solid signal to noise ratio performance when compared with other cameras with large sensors, such as the Fuji X100S. It will be interesting to see how the GR compares when a full sample comes in for testing.

Nikon and Ricoh have gone for incredibly similar optics on their premium compact cameras. Both are fixed, 18.5mm f/2.8 lenses, which offer an equivalent of roughly 28mm in 35mm terms. Both also feature seven elements in give groups for attractive out of focus areas.

The Ricoh GR features an inbuilt ND filter, which should help when shooting at wide apertures in bright light, while the camera also has the ability to shoot in a 35mm "crop" mode - this could prove useful to street photographers looking to get a little closer to the subject.

One of the major concerns we had about the Coolpix A was its noticeable vignetting, even at mid-range apertures such as f/8 and even f/16. We'll be keen to see if the Ricoh also suffers from this problem, given it has the same sensor size and focal length.

One of the claims that Ricoh is making about the GR is that it can focus in as little as 0.2 seconds. So far, we've only been able to use a pre-production sample of the camera but it seems as if this claim might well be true.

Conversely, we were a little disappointed by the Coolpix A's speed, which even in bright sunlight displayed a bit of to-ing and fro-ing, taking around half a second to get the subject sharp. The A is also a little tardy in its shot-to-shot times, which doesn't help matters.

Both the Coolpix A and the GR offer macro focusing from around 10cm. While this is reasonably helpful for getting closer to subjects, any users of the Ricoh GR IV may miss its capability to get in as tight as 1cm.

Both the GR and the Coolpix A have impressively high-resolution 3-inch screens. The GR just about pips the Coolpix A with its 1,230k dot transparent LCD compared to the A's 921k dot TFT LCD.