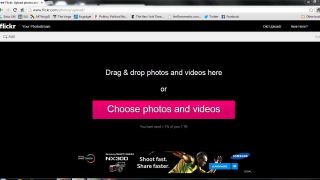 Yahoo may have made Flickr awesome again by giving every user a massive terabyte of storage space today, but in its excitement to get the launch out the door, Yahoo forgot to switch off its legacy monthly upload limit.

Despite its new FAQ page stating that users can upload photos up to 200MB in size to the photo sharing service, customers keen to back up their photo library discovered that the 300MB monthly upload limit is still in place.

As some more mathematically inclined Flickr users were quick to point out, that 300MB restriction would mean it would take 277 years to fill 1TB of space online.

A glitch in the system

There was every indication that the upload limit wasn't a nefarious ploy from Yahoo to limit uploads to the new Flickr.

For a start, users who hit the limit were greeted with a message to sign up to Flickr's now retired Pro plans.

There's also the common sense approach that asks why Yahoo would offer the 1TB of storage if nobody would ever be able to fill it in their lifetimes?

Fortunately, Javascript engineer at Flickr Stephen Woods took to Twitter to let complaining customers know that it was just a bug.

But despite initial uploading issues, it seems that many legacy Pro users are less than content by the new structure for Flickr.

Yahoo has a program in place for these customers to continue paying the current rate for Pro membership, but is also offering refunds on a pro-rata basis for those customers whose needs are now met by the free service.