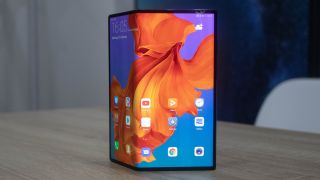 The Huawei Mate Xs could be more affordable than the Mate X, above (Image credit: Future)

We know Huawei is working on a new foldable phone dubbed the Huawei Mate Xs, but now we’re also hearing that it could be cheaper than the original Huawei Mate X.

That’s according to supply chain sources speaking to Yesky (a Chinese smartphone news site), who say the screen is now easier to produce, thereby lowering the cost of manufacturing the phone.

Whether those savings will be passed on to consumers is unclear, but given how prohibitively expensive most folding phones are it would make sense for Huawei to cut prices where it can.

Meanwhile, MyDrivers (another Chinese tech news site) – seemingly citing the same sources – adds that the body size of the Mate Xs will be smaller than the original Mate X. The phrasing suggests, though, that the screen might remain around the same size (meaning around eight inches), so the Mate Xs might achieve this by having smaller bezels.

The sources also claim that the Huawei Mate Xs will be more durable than its predecessor, and say that a third Huawei foldable will land in the second half of 2020.

Coming soon, but probably not everywhere

As for when you'll be able to buy the Mate Xs, the sources reiterate that it will go on sale in March, at least in China; Huawei itself has previously said as much, and this suggests the date hasn't changed. It's likely to be announced at MWC 2020 in late February.

As ever we’d take all these claims with a pinch of salt for now, but if Huawei does make its next foldable smaller, tougher and cheaper then it could be a direct competitor to the Samsung Galaxy Fold 2, which is rumored to be seeing similar changes, and which is also likely to be announced in February.

Of course, with the Huawei ban still in effect, Samsung's phone is sure to be more widely available.