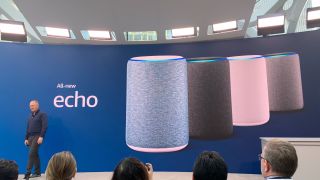 Your favorite smart home devices are going to get an upgrade this year - Amazon has just announced five new Echo speakers for 2019, including a Hi-Fi speaker called the Echo Studio, a new Amazon Echo Dot with an LED display and a wall plug Echo called the Echo Flex.

While details are still pouring in about the new members of the Echo family, we've done our best to round-up everything we know so far about the speakers and displays, along with pricing and release dates.

Amazon has upgraded its most popular smart speaker, the Amazon Echo Dot, to include an LED display that tells you the time.

The Amazon Echo Dot with Clock can also display things "like the temperature or alarm times", according to the company, which announced the new model at its 2019 hardware showcase in Seattle.

In a bid to bring Alexa into the bedroom, Amazon says that "if used as an alarm clock, you can simply tap [it] to snooze your alarm for a few more minutes of sleep".

Meanwhile, the Amazon Echo has been gifted an all-new sound system, which will  hopefully improve upon the somewhat lacking audio performance of its predecessor.

The new Amazon Echo (2019) now boasts "the same audio architecture as Echo Plus, including neodymium drivers, 3-inch woofer and increased back volume so the bass feels stronger, and the mids and highs are clearer", according to Amazon.

Aside from looking a little chunkier, the Amazon Echo (2019) doesn't look particularly different from the previous Echo model, still sporting that wraparound fabric grille – however, it will come in a new color, which Amazon has dubbed 'Twilight Blue'.

There's a new kid on the block, too: the Amazon Echo Studio, which the company says is "the most innovative speaker we’ve ever built".

According to Amazon, its the "first smart speaker that brings 3D audio from Dolby Atmos right into your living room" – whether the Studio will deliver true Dolby Atmos surround sound, or will provide an approximation of it, is unclear at this stage.

The new smart speaker uses "built-in Alexa microphones" to "automatically calibrate and model the room around you" – so, it should sound fantastic no matter where you have it in the home.

We already have the Echo Show and the diminutive Echo Show 5 – now Amazon has announced a smart display that sits firmly in the middle of the two, the Amazon Echo Show 8.

With a (you guessed it) eight-inch HD display, Amazon says the new smart display combines the "crisp, powerful audio" of the 10-inch Echo Show, with the "camera shutter and sleek form factor" of the 5-inch Echo Show 5.

Last but not least, if the Amazon Echo Dot with a screen is still too much of a financial commitment for you but you still want Alexa in your home, check out the Amazon Echo Flex.

The Flex is basically a two-way microphone that plugs into any outlet in your home. It's not going to play music, but it can tell you the score of your favorite team when it's playing, control smart devices in your home and answer general inquiries.

In addition to the micro-microphone, the Echo Flex also has a built-in USB port so you can easily charge your phone from it.