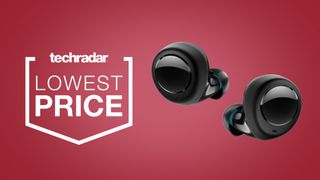 If you were curious about Amazon's foray into the world of cheap wireless earbuds, they've given you another reason to test the Amazon Echo Buds this week. This $40 price drop comes pretty early in the lifespan of the recently released headphones, but it's an Amazon Echo Buds deal we're willing to take. You can pick up the Alexa-enabled earpieces for just $89.99 at Amazon right now, but are they worth grabbing even with such a price drop?

To put simply, yes. The cheap Amazon Echo Buds have taken flak for their use of Active Noise Reduction rather than cancellation (a distinction that led many first wave users to question the level of external silencing on offer) and audiophile-frustrating sound quality, but there's a lot to be celebrated here and especially at this price tag.

While you're not getting full noise cancellation out of these cheap wireless earbuds, you are getting a pretty robust set of noise-isolating headphones capable of drowning out background sounds as well as sets of much higher price tags. While a true audiophile might take offense at some of the muddier bass lows and particularly stringy higher frequencies, an everyday listener isn't going to take much notice when their favorite song is banging out. In a real-world setting, this Amazon Echo Buds deal offers excellent value for money on a fair set of headphones.

A cheap set of noise canceling-ish earbuds with Alexa built in (obviously) is perfect if you're just testing the true wireless life or want a secondary cheaper set. Plus, you'll be shelling out $249 for AirPods Pro or $230 for the Sony WF-1000XM3's, making that $90 Amazon Echo Buds deal all the more impressive.

Amazon Echo Buds | $89.99 at Amazon
Save $40 on the Amazon Echo Buds, bringing the brand new earbuds down to just $89.99. That's great value for money when you consider competitor pricing right now, and a great chance to test out these beginner true wireless earbuds.

We're tracking all the best Amazon Echo Bud prices going right here on TechRadar. If you're planning on shopping around a bit more before grabbing your next set of wireless earbuds, check out the latest AirPods deals.