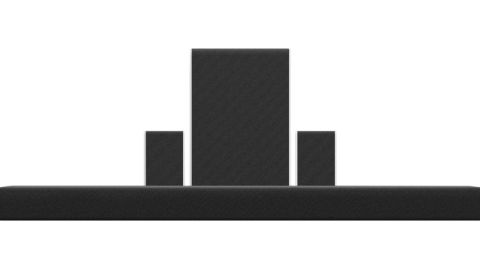 Vizio’s 36-inch Dolby Atmos soundbar provides a ton of features for its lower-than-expected price tag, but it leaves a lot to be desired in the performance category.

As a brand, Vizio is all about giving you the most for your money. It’s a claim that’s always proved true when it comes to the company’s TVs, and now it wants to extend that offering to its soundbars and audio products, too.

To see an example of that, look no further than the new Vizio 36-inch 5.1.2 Home Theater Sound System with Dolby Atmos (or, technically speaking, the SB36512-F6). This soundbar comes with two satellite speakers, a subwoofer and the ability to play Dolby Atmos for $499.

Why lower? We had one underneath a 65-inch Vizio P-Series Quantum screen that we had on loan from Vizio for review and while the soundbar looked fine underneath the larger flatscreen, it doesn’t hide all the cables that come down from the back… of course, go too small with the screen and the problem you might run into is that the bar covers the IR receiver on your TV.

Just proceed with caution if you’re looking for an audio companion for the 32-inch screen you bought on Black Friday this year.

Inside the speaker itself are five drivers set in a left, right, center and height-left, height-right configuration. Add the two satellite speakers and subwoofer and you have the promised 5.1.2 sound on the box. The satellites, however, aren’t necessarily going to blow you away - they’re relatively tiny and, in our experience, didn’t output the same volume as the main bar.

The 6-inch subwoofer, however, is a beast. Despite only taking up around two feet of living room space and weighing 10 pounds, it can create some floor-thumping audio. Note that the sub will need to connect to a power outlet but is otherwise wireless. Even better, it provides both power and audio signal to the satellite speakers via two ultra-long cables.

On the back of the soundbar, you’ll find an HDMI Out (ARC), HDMI IN, Optical Audio In and 3.5mm jack ports for audio, plus a USB and Ethernet port. On the front of the soundbar you’ll find, well, you won’t find anything other than a few LED indicator lights that flash to tell you what’s happening. It’d be nice if Vizio included a small LCD screen on the front, but there is, at least, a very dimly lit one on the remote itself if memorizing LED patterns isn’t up your alley.

In terms of features, there are two marquee attributes that are worth calling attention to: Dolby Atmos and, to a lesser extent, SmartCast.

Atmos, if you’ve never heard it before, is the next step on the path to more realistic-sounding audio. Instead of five channels of discrete audio, Atmos provides two additional height channels to create a audio sphere where audio can occur both above and behind you.

Playing Atmos requires both content and a source - either an LG, Sony, TCL or Vizio TV, an Atmos-capable Blu-ray player, Xbox One or an Apple TV. Once you have Atmos content on an Atmos compatible system, the lower LEDs will light up green to indicate you’re hearing Atmos - you know, if you can’t tell by the sound of the helicopter flying overhead.

The other feature worth diving into here is SmartCast - an extension of Chromecast Built-in that allows you (in theory) to cast content from your phone to your soundbar.

If we sound a bit hesitant there, it’s because SmartCast was hit or miss on the soundbar. And anytime we’d try to connect it to Vizio’s SmartCast mobile app - an app we use regularly, mind you - it wouldn’t fully pair.

Thankfully, if SmartCast fails, there’s always built-in Bluetooth to fall back on. It’s a bit laggier than direct streaming via Chromecast Built-in, but hey, at least it’s reliable.

Vizio’s 36-inch soundbar is almost impeccably tuned to reveal the little audio details in a movie or TV show that you usually miss without an external sound system. Examples of this could include footsteps of a character running, distant shouts that occur offscreen or elevator bells dinging - these are are all examples of effects you might not hear when using a TV’s built-in speakers but Vizio’s soundbar handles with ease.

The vast majority of these effects will come from the main bar itself. The satellites certainly add a bit of oomph to ambient music, but most dialogue and music is relegated to the main bar. What that means in practice is that the soundbar has a pretty limited ‘sweet spot’ of a few feet directly in front of the main bar. Sit off to the sides, and the effects lose their panache.

That sweet spot becomes even more apparent with Atmos tracks that require the upfiring speakers to bounce sound off a low ceiling to create the signature sound bubble. Under the right circumstances, Vizio’s soundbar can create a really authentic Atmos experience, but again, because of the size, it’s not the most robust one we’ve ever encountered and is not recommended for AV enthusiasts with a large living room or one with a vaulted ceiling.

The more significant problem, and the one you’ll run into more likely if you’re using it in tandem with a Vizio TV, is that the soundbar ramps up in volume with each little tick representing a significant boost in volume.

Worse, because there’s limited volume leveling built into the soundbar (it has to be done through the Vizio TV) some content is room-shaking at around an 8 volume level, while most of the time 20 is enough to get the neighbors knocking on your door.

While clarity isn’t a major issue in the soundbar - the mids are very well covered here - it’s not the most musically talented bar to cross our entertainment center in the last few months. Music, while relatively detailed at lower volumes, doesn’t have a wide soundstage and simply sounds loud without any real dimension. That’s not to say you won’t enjoy listening to music on the soundbar - you will - it’s just that there’s room for improvement here.

The Vizio Soundbar SB36512-F6 ticks all the right boxes in terms of features - offering both Chomecast casting and Dolby Atmos at a value price - but skips on some of the more premium features including an LCD screen on the soundbar and improved soundstage.

Overall this is a solid upgrade on your TV’s speakers, surely, and if you’re looking for Atmos on the cheap it’s a good place to start, but some moderate sound issues hold it back from achieving aural greatness.