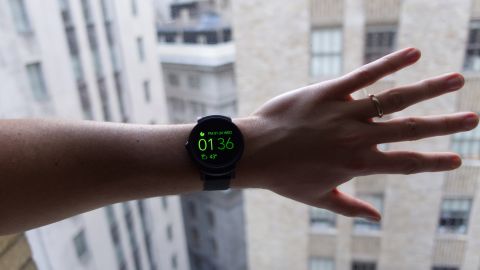 This Android Wear smartwatch isn’t revolutionary, but it’s exactly what the wearables market needs. The Ticwatch E packs in nearly all of the essentials and offers it at the perfect price point.

The Mobvoi Ticwatch E is not the first great Android Wear smartwatch, nor is it the most stylish option available. It doesn’t even break new ground with features or use cases, but for such a low price, it doesn’t really have to.

Available for $159 (£120, AU$202) and often lower through Amazon, this smartwatch is aimed squarely at casual users with equally casual budgets. That price could drop even lower in the lead up to Amazon Prime Day, which is coming on July 15.

Unlike the sport-focused Ticwatch S, this model is unassuming and simple in design, providing little more flourish than a Swatch analog timepiece in its IP67 water-resistant package. While it's been surpassed by the Ticwatch E2 (which is upgraded and water-resistant), the original Ticwatch E is still a great value with simple design and functionality.

Coming at a time when the release of Android Wear 2.0-equipped smartwatches has slowed, Mobvoi’s low-end smartwatch ticks all of the boxes – something that big manufacturers seemed to have such a hard time achieving. Better yet, its low price tag more or less removes the biggest hurdle facing more expensive modern smartwatches.

Mobvoi's affordable Ticwatch E is widely available through its own web store, in addition to Amazon. Available in the US, UK and Australia, the company also ships to a range of countries, so it's worth checking if it can accommodate yours.

The Ticwatch E doesn’t try very hard to make it known that it’s a smartwatch. Aside from the always-on display and the rather thick build, it’d be hard to sort this apart from a batch of analog watches. And that’s an admirable quality, one that we’re surprised can be accomplished at such a low price point and without the usual smartwatch staples like steel and leather tossed into the mix.

The watch's display is one of the high marks of its overall build quality, putting forward a 1.4-inch OLED display that's suitably vibrant and sharp at 400 x 400 (287dpi). For reference, this is a higher resolution than what options like the Huawei Watch 2 and LG Watch Style put forward, albeit for far more cash.

As with all Android Wear 2.0 smartwatches, you’ll find a button around the watch’s crown to summon the list of installed apps or Google Assistant itself, which can assist you with tasks like texting or telling you the weather. Unlike most smartwatches, this button is on the watch’s left side, which doesn’t really create an issue – just worth noting.

Compared to the Ticwatch 2, the Ticwatch E is stripped down in a few rather insignificant ways. Removed is the unique “tickle strip” that let users scroll through the interface by sliding a finger along the side of the watch in lieu of an Apple Watch-esque rotating crown. And, as previously mentioned, this watch gets by on basic build materials, its body being made of polycarbonate and the watch face covered in anti-scratch glass.

On the watch’s bottom, there’s a small optical heart rate sensor sitting in the middle. Unlike some smartwatches, this one doesn’t bulge out from the Ticwatch E’s body. Next to the sensor are the charging pins – a proprietary charging method that might not be as easy as the inductive charger included with the Ticwatch 2 and many popular models, like the LG Watch Style.

Next Page Performance, fitness and battery