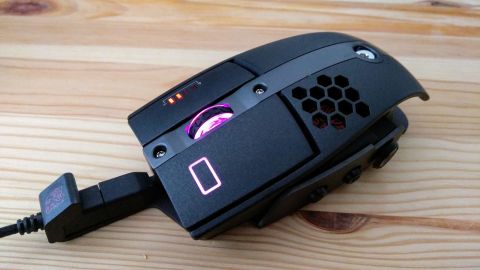 A highly ergonomic design that ends up being slightly disadvantaged by its ability to connect via USB or WiFi.

Gaming mice, like keyboards, are very much a personal choice. A design that might be perfect for one person could be utterly unworkable for another.

Does adding these special features solve the awkward transition to a new mouse design that gamers dread, or just introduce new problems?

Most of the technology in the Thermaltake Tt Sports Level 10M Hybrid Advanced Gaming Mouse is borrowed directly from its wired Level 10 M Advanced RGB brother. A distinctively tech-themed mouse designed for Thermaltake by the BMW DesignworksUSA styling house.

What it gains over that design is dual wired and wireless operation. However, it also curiously managed to misplace a few existing features during the upgrade.

Gone is the left side thumb support, presumably to reduce weight. And, where the Advanced sported ten buttons, the Hybrid only has six.

LED illumination was also reduced from three zones to two, with the Tt Sports logo hidden under the hexagonal holes no longer has an RGB selectable light.

With all these omissions, it's tempting to think that the Hybrid is a retrograde step from the Advanced model. But, it does have a few virtues that the cheaper wired design can't match.

Ask most serious gamers about their mouse preferences, and they'll usually side with a wired mouse. An argument can be made that wires inherently create less lag than a wireless connection.

The Hybrid, as the name suggests, offers both types of connection in a single mouse. In doing so, it enables the gamer to switch between those options while retaining a consistent mouse experience.

That capability might seem ideal, but the approach that BMW DesignworksUSA took in the Level M10 Hybrid is far from perfect.

Traditionally wireless mice have a USB dongle that you install on the PC, an internal transponder, and batteries that need to be charged or replaced. The Hybrid doesn't break that model, though the designers also decided to make the transponder component an independent physical part that you must reattach to the mouse.

The mounting point is the same connector as the USB cable, and to switch you must remove the USB cable and replace it with the transponder module.

Correspondingly a small wireless dongle, clipped to the USB cable, can be inserted into the PC, and you are good to go.

But, that description makes the change sound much slicker than it is in reality.

Getting the cable off and the wireless module on (and vice versa) to the metal prong that projects out of the mouse is a fiddly exercise at best.

That wouldn't be a significant issue if you weren't required to repeatedly switch back and forth to use the cable to recharge the internal batteries.

We should also mention that the Level 10M Hybrid already occupies a sizeable plot of mouse mat territory, and the projecting prong only serves to extend that footprint even further.

We're of the view that the wireless module should have been inside the mouse all along, and the retaining prong should have retracted inside when not required. What these wireless elements get right is the connection, using 5.8 GHz and not the congested 2.4 GHz range.

For home users, this provides a viable alternative to a wired connection. Although, we've yet to see anyone at game tournaments choosing a wireless mouse over one that has a 1000 Hz USB link.

Despite the Hybrid connection shenanigans, our overall experience with the Level M10 Hybrid was a good one.

What we especially liked was some simple ergonomic adjustments the designers included, enabling the topology of the mouse to be modified.

At the rear are two threaded hex bolts that can be rotated using an included tool. Rotating the bolts moves the rear palm support vertically and horizontally by about 5mm in each direction.

Those might seem tiny alterations, but surprisingly the comfort improvements these changes illicit can be significant.

Another headline feature of this product is the fantastic DPI range that the mounted Avago 9800 laser sensor can detect.

Humans, as a rule, don't have the dexterity to control their limbs or digits in 16,000 DPI increments, but having this level of sensitivity has other fringe benefits.

Being able to divide an inch of movement so finely, it is also possible to subdivide it in many ways to more closely match the exact DPI that a gamer might prefer for a particular game.

The associated Tt Esports Command Center application allows the sensitivity of the mouse to be set to any value from 100 to the impractical 16000 DPI level, in 100 DPI increments.

Each of the five user-definable profiles can have four different DPI levels, together with custom lift-off control, angle snapping and even button response delays.

All these pre-sets, plus any macros and lighting effects are all stored on the mouse's flash memory, making them available on any PC you connect.

On a PC with the Command Center installed, you also have the option for the mouse to automatically switch to a chosen profile when you launch any application.

Most of the time this all works as advertised, though we must mention the Avago 9800 laser sensor, a component that has cultivated a degree of notoriety amongst some gamers.

All laser mice have inherent acceleration, and with this sensor, in particular, some found it was noticeable at low DPI settings.

Firmware adjustments have been issued on some designs that use it in an attempt to negate the perceived problem.

That said, this is a massively popular sensor that has successfully appeared in a slew of recent SteelSeries and TorQ mice, among other brands.

To be clear; this wasn't a problem that we noticed in this product, but we feel compelled to mention it.

A more quantifiable issue for us was the excessive weight of the Level 10M Hybrid. 178 grams is heavier than some gamers would prefer, and unfortunately, Thermaltake provided no means to alter those numbers.

Putting aside the vagaries of mouse mass and shape, the Level 10M Hybrid does an admirable job in both wired and wireless modes. Once tailored, we found it a clinical tool and the ergonomic adjustments made extended gaming very comfortable.

We have only two reservations; the weight and that super-annoying prong at the front. Weight-wise, gamers often like a mouse of a certain mass, as they expect a specific level of inertial resistance to movement, and not being able to tweak that aspect is regrettable.

While it succeeds in that objective, what it also contributed was to make switching to wireless a chore and adds another 4cm extension to a mouse that is already 12cm long.

For those with limited space that could be a deal-breaker.

The LED lighting is minimalist, though we found it useful for quickly identifying the profile that we’d selected, if it accidentally switched in mid-combat.

That can happen way too readily, as the profile selection is via the four-way mini-joystick directly beneath where most will rest their thumb. A position where it is ideally positioned to be pressed, but also occasionally struck by accident.