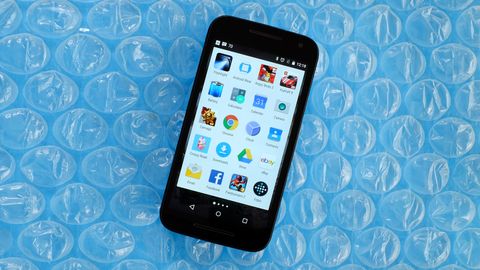 As well as toning down the front-on design, the new Moto G makes a handful of fairly meaningful improvements. First, we get the more recent Snapdragon 410 CPU instead of the old 400 one.

Water resistance is in this year too.

The best bit, though, is the camera. The second Moto G's was fairly good, but the new one is a whole league ahead. 2014 Moto Gs suffered from substantial lag, which doesn't seem to affect the new models, particularly the 2GB RAM one.

It's the baby version of the LG G4. Except it's nowhere near as powerful.

The LG G4c has specs very similar to the lower-end Moto G, but with current software it suffers from very annoying interface lag throughout. It's a bit of a pain to use.

Battery life is good, but that doesn't really make up for the lag. If LG sorts out the phone's performance, it could be a contender, but I don't see it trumping the Moto G.

The other low-cost waterproof phone. Its waterproofing is good, and its design is slimmer and perhaps a bit slicker than the Moto G.

Its processor is more powerful too, with eight cores instead of four, and battery life is pretty good. However, the camera is a lot weaker. The specs sound the same, but actual camera performance is far weaker in the Sony.

General performance is also slightly better in the 2GB RAM Moto G, despite the lesser CPU. However, the Sony outperforms the 1GB version. Be careful about which version of M4 Aqua you end up with: most in the UK have only 8GB storage.

It's only a little more expensive than the Moto G, yet it's more powerful, has a higher resolution 1080p screen and a stylish, almost flagship design.

Yet despite the beefier specs the performance is oddly lacking and with an invite system in place it's trickier than we'd like to get hold of. The OnePlus X also lacks the Moto G's waterproofing, so it's not the clear cut winner, but it looks and feels like a more premium phone.