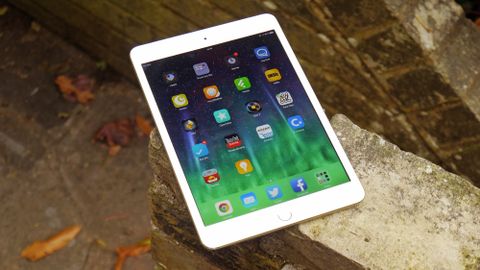 I'm going to get this out of the way now: the big issue here isn't that Apple is using old technology. It's that it's offering a very slightly upgraded tablet while keeping last year's model on sale right next to it on the shelves.

Apple is going to cannibalize its own sales - but then again, if the money is coming in somehow, what does it matter which version you go for? It just means it's impossible to recommend this iPad while the predecessor lives, but an improved range is a great thing.

Let's get a positive hat on now though - there are some good parts. The gold coloring is going to entice a lot of people into the iPad fold, as it's a sought-after color.

That said, I prefer space gray, but at least Apple is offering it.

The 128GB storage size is ample for iPads, if not a little expensive, but having it there is good for those who can afford it.

Touch ID is a good feature with a lot of promise. If Apple Pay goes big, this is a simple way to use it. If you're into security, then it's the best way to secure an iPad without needing to faff around with codes.

And if app developers really come up with clever ways to integrate the fingerprint reader, then the iPad mini 3 becomes a lot more attractive.

Look above and you'll see a lot of "ifs." The whole selling point of the iPad mini 3 is Touch ID, and I don't feel it really adds a lot right now. It's future-proofing at best.

If Apple Pay doesn't proliferate and you don't see any apps that use the fingerprint scanner, then you've just wasted a lot of money on a feature that merely saves you pecking out a code to open your tablet.

Everything good about this tablet - and that's diminishing, given it's last year's tech - is on the iPad mini 2, which is much cheaper and will likely do 99.3% of anything you want from the mini 3.

Unless you like gold, of course. If that's you, you've got no other choice.

The iPad mini 3 isn't a bad tablet. It's got a great OS, new features and is still attractively designed. It's just that all these features are available on the mini 2 for a lot less money.

Touch ID is a nice feature, but it's not enough to recommend this tablet. I can't see Apple Pay taking off in the next year to the point where you HAVE to have Touch ID in your life, and apps that really take advantage aren't here yet.

I just can't work out how Apple can justify launching this tablet at the price point. Last year, it was all the power of the Air in a smaller frame.

This year, it hasn't matched the Air 2 in tech spec, yet the price hasn't dropped. And you can get nearly all the good features cheaper on the iPad mini 2.

So while it might seem that the score here is harsh for what is a half-decent tablet with a good screen and access to a brilliant app store (albeit a tablet still based on last year's technology), it's the score it deserves because there's a better option to its left.

Buy the iPad mini 2, or wait a few months and see if Apple Pay and Touch ID-enabled apps start to roar in popularity. If not, there's no point in the iPad mini 3.