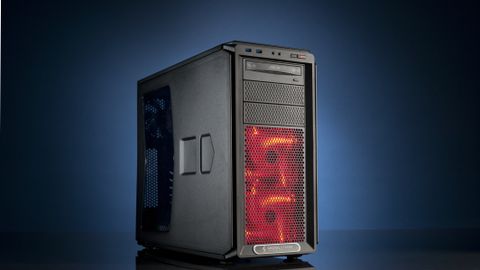 The Vanquish II is a well-rounded machine, but its motherboard and storage options, while sufficient, aren't ideal.

The PC gaming crowd can be tough to please. They want a high-resolution gaming machine that runs at 60-plus frames per second – but it can't be a one-trick pony, either. Every component needs to be upgradeable and be available on store shelves. Oh, and if it's built by someone else, it better be almost as affordable as building it yourself.

You can imagine my surprise, then, when Digital Storm's latest Vanquish II gaming PC scribbled a checkmark next to each and every requirement in the book.

You wouldn't know it by the unsuspecting, jet black case – no green neon paint or gaudy, haphazard, LED light show here – but underneath the hood of the Digital Storm's latest Vanquish II beats the heart of a wallet-friendly gaming PC. That is, under the cool hue of a steady blue light.

That starts with the 4th gen Intel Core i5 processor that works as the brains behind the brawn, while 8GB of Digital Storm-certified memory and a GeForce GTX 770 graphics card deliver the power needed to play this year's biggest and best games. The included storage options in the model sent to TechRadar – a 120GB SSD and a 1TB, 7200 rpm hard drive – are a good start, but will fill up fast. Thankfully, the included power supply supports an additional SSD and two extra spinning drives, giving you enough expandability for years to come.

Aesthetically, there's a lot to love about the Vanquish II. The Corsair Graphite Series Black 230T case is simple, unimposing and should go with whatever décor surrounds it. For a standard desktop, it's average size – neither too big for a local LAN, nor so small that it strays into mini-ITX territory. The unit measures 21.65 x 8.27 x 17.32 inches (W x D x H) and weighs in at 15 pounds, so not all that light, either. What's most lovable about this case is that it has room to grow, with seven expansion slots and three optical drive bays for a Blu-ray or secondary DVD drives.

Open it up, and it's instantly clear that the Vanquish II is a smart, cleanly built system with next to no cooling issues. After a 12-hour gaming/web-browsing binge, the chassis didn't feel a degree warmer and, surprisingly, the components inside the case were just as cool. This speaks volumes for Digital Storm's design philosophy. They've placed a priority on positioning cables, creating a wide-open space for the myriad fans to do their job.

Don't think that Vanquish is invulnerable, however. This rig's Achilles Heel isn't found on its inconspicuous case, but rather on the motherboard itself. The micro-ATX form factor looks as streamlined as it's ever been. But check out the two DDR3 memory slots. With an initial 8GB of RAM, it's ready to take on whatever today's gaming space can throw at it. What's on the horizon, though, is another story.

Two RAM slots and a single open PCIe slot mean that there's little in the way of modification here. Thankfully, the board supports up to 16GB of DDR3 memory, so it'll likely hold for another couple years without needing an overhaul. Regardless, the limited amount of PCIe and RAM slots sets a frighteningly close expiration date for one of the most expensive parts in the case.