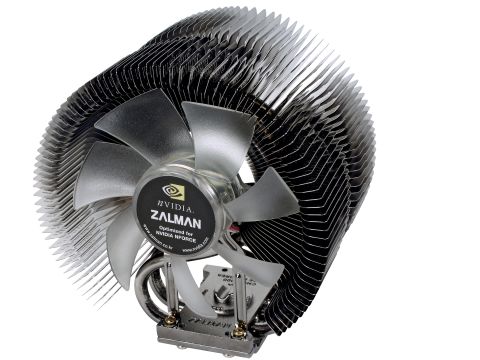 An excellent choice for a CPU cooler

LEDs don't often suggest a good product. You'll usually find what's been spent on pretty flashing lights has been deducted from the rest of the budget.

Zalman does not do this. If it had skimped on the bearings in its glowing green CPU fan, we'd certainly know about it. This CPU cooler is quick to install - which is as much thanks to the AM2 architecture as anything else - and very quiet indeed.

Even at its peak speed, the fan can be classed as quiet; at its slowest speed, it's as close to silent as fans get. The clever design, which sucks air through a tunnel of heat-dissipating fins and over a series of figure-of-eight heat-pipes, really looks after your CPU.

The highest CPU temperature we managed on the lowest speed (in conjunction with the Athlon 64 X2 4600) was a paltry 41 degrees C, more than cool enough for any chip. If you've got space in your case, you won't find a much better cooler on the market. PC Plus staff