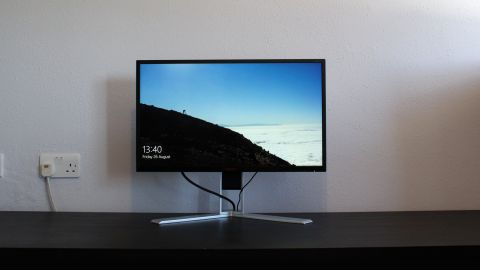 Aside from the very minor niggles we've mentioned, the AOC AG271QG is a winner. If you're looking for a display that has all the required technology for fast-paced gaming as well as a great image on the desktop, easily suitable for graphics-heavy design work, the AG271QG offers both. It's just a shame AOC can't offer it at a slightly lower price, but this combination of hardware, with an IPS panel, fast refresh rate and G-Sync technology does not come cheap.

AOC's new line of AGON displays is aimed squarely at gamers. They feature specs, designs and features intended to provide both a bright, vivid image on the desktop and fast performance in demanding games.

There are two models in the line: the AOC AGON AG271QG and the AGON AG271QX, both of which are 27-inch displays with IPS panels and a fast refresh rate that go well beyond the usual 60Hz. The two models differ in their inclusion of either G-Sync for Nvidia graphics cards, or Adaptive Sync for people whose PCs have AMD or Intel graphics cards.

In short, G-Sync and Adaptive Sync eliminate the problem of 'screen tearing' which has plagued 3D gaming since the early days. When the graphics card outputs frames at a speed which doesn't match the display's refresh rate, you sometimes see the monitor struggle to keep up, with noticeable visual 'shimmering' during animation. It's been a problem for so long that most people have become used to it, but you easily notice the improvement when gaming on a display like the AOC AGON AG271QG, with much smoother animation.

The AG27QG offers a speedy 165Hz refresh rate too. If you're used to gaming on a standard 60Hz display, the jump to higher refresh rates, again, is easily noticeable and results in much smoother animation. When combined with G-Sync, it offers a much better gaming experience.

Perhaps that's why AOC has decided to jump into this market. Demand for gaming displays is at an all-time high, thanks to these new capabilities. Previously, AOC wasn't really known for high-end products. Although it has launched a few 4K screens recently, the bulk of its portfolio is entry-level or mid-range displays, always with an eye on affordability.   AOC's product design has never been known for being the best around either, with ugly menus and fairly bland casing on its displays, which in some cases have been rather plasticky, and cheap.

None of that could be said about the AG271QG. AOC has really done its homework in providing just about everything gamers are looking for when spending considerable amounts on a high-end display.

It has a really solid metal stand, with a large hole at the bottom for cable management. It offers all the typical ranges of motion - it can be raised or lowered, rotated, pivoted around to be used in portrait mode and tilted back and forwards. There's a scale at the side of the stand, which AOC calls an Ergo Dial, so you can remember the exact height you prefer to keep the display at. In practice, it's not a bad idea at all.

The lower bezel is a textured matte black plastic, while the screen itself is also matte, to reduce any screen glare. The rear of the display is also plastic, but it's covered with a deep red backing plate, which looks very smooth, and there's an embossed AOC logo at the top.

There's what appears to be a holder for your headphones at the side, a feature we're not entirely convinced by. It's just a cheap piece of plastic that folds down, and it worked a bit loose during testing, ruining an otherwise slick appearance.

As with all G-Sync displays, inputs are limited to just a single DisplayPort 1.2 connector and HDMI, but AOC has a four-port USB 3.0 hub, with two ports at the bottom and two at the side, one of which is colored yellow as it's a fast charging port. Good to see.

Next Page Features and performance