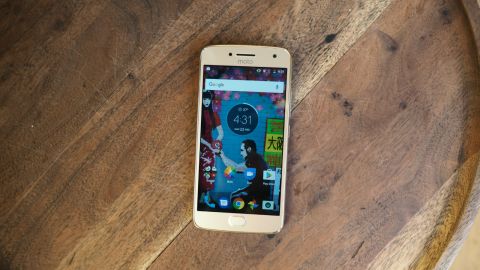 Some phone makers insist on heavily remixing stock Android software, but Moto is not one of them. Following closely in the steps of Nexus and Pixel smartphones, the Moto G5 Plus does very little to stray for Google’s vision for Android Nougat.

Moto will be rolling out an update to Android Oreo features eventually (the Moto G5S Plus and Moto G5 already have it), but until then, Nougat will have to do.

While the Moto G4, Moto G4 Plus and Moto G4 Play came with the Google Now launcher, the new phone’s software more closely resembles that of the Google Pixel and Google Pixel 2. Instead of an app drawer button, you simply slide a finger up from the bottom to reveal all of your apps.

Of course, you’re free to install the launcher of your choosing, but this refined user interface is at its peak and a lot of people are really going to enjoy it.

All of Google’s stock apps are here, like Phone, Messaging and Contacts. There are even a few surprises built-in, like Duo and Wallpapers and Google Assistant.

There is a little bit of Moto in the mix, too. There’s an app that is aptly titled “Moto” on the homescreen by default and it’s your shortcut to unlocking some interesting features baked into the device.

We’ve seen most of these before, like “twist to open camera” and “chop twice for flashlight”. But making its debut here is the inventive one button navigation.

Once activated, the capacitive navigation buttons that you’re used to disappear and shifts those duties to the fingerprint sensor.

To go home, quickly tap it once. To look at recent apps, tap and swipe right. Going back is a simple swipe left. Like the Moto Z, you can put the phone in sleep mode with the fingerprint sensor as a more accessible alternative to the power button. To do this, just touch it a little longer than a tap, but shorter than a long press. Sounds confusing, but it’s executed pretty well.

Lastly, Moto earns points for its smart display tech. When you move your hand over the phone, a screen lights up that shows notifications and lets you pause music. It’s a nice quality of life touch that makes interacting with the G5 Plus faster and easier.

If you want true multimedia bliss, the Moto Z is definitely the best option offered by Motorola. But that G5 Plus is certainly no slouch and in fact, it one-ups its flagship sibling right out of the gate.

Starting with music, the G5 Plus comes with a 3.5mm headset and Bluetooth 4.2 to ensure that both wired and wireless tech adopters are suited. As you may remember, the Moto Z and Moto Z Force omitted the wired option following the Apple’s controversial decision with the iPhone 7, only to bring it back in the Moto Z Play.

This device comes stocked with Google Play Music as its music player by default, but you’re free as always to load on whichever music streaming service that you’d prefer.

As it does for music, Moto’s budget device calls upon Google’s suite of video apps, Google Play Movies and YouTube to provide what you’re looking for. Like the G4 Plus, the G5 Plus a 1080p display, though it looks plenty vibrant and crisp for its size. Overall, the quality is as expected, but is nevertheless impressive considering the low price tag.

Lastly, your gaming experience on this phone will depend on the types of games you like to play. The classics work without a hitch and even newer titles, like Fire Emblem Heroes and Hearthstone, look stunning and are each a smooth, enjoyable experience on the G5 Plus.

Whatever it is you enjoy doing on a phone for entertainment, the built-in microSD slot that supports up to 128GB of extra adoptable storage will keep the party rolling for quite some time.

Moto’s G series has always worked against the idea that a low price phone can’t be thoughtfully constructed or packed full of competent specs, and that baton has been passed on to the G5 Plus.

You certainly won’t find a Snapdragon 835 inside, but the Snapdragon 625 octa-core SoC is a small, albeit noticeable speed boost over the 617 inside of the Moto G4 Plus. Also improved inside of that package is the Adreno 506 graphics processing unit (GPU) that operates at a higher clock speed than what was found in last year’s model.

Our review unit has 4GB of RAM inside, so it’s the top of the line in Moto’s G5 lineup in the US (and anywhere else, for that matter).

In fact, that puts it higher than the 3GB of RAM-equipped Moto Z Play if you’re just comparing specs. During our time with it, we spent no time waiting on hanging menus, and multitasking with Nougat’s split-window feature didn’t slow this phone down at all.

When put through its paces on Geekbench 4, the Moto G5 Plus spit out an average of 3,824 for the multicore score. Oddly, that’s well above the 2,600 score put forward by the Moto Z Play, which aside from the 3GB of RAM, matches this new budget phone completely. We think it’s fair to attribute this to inconsistencies in the benchmarking app and/or vast performance improvements from Nougat over Android Marshmallow. One shouldn’t place too much confidence in those scores, anyway.

Wondering where the Moto Mods are? Like you, we were hoping to see them appear on the G series one day. And thankfully, Motorola didn’t totally rule out Moto Mod coming to the budget line when we asked at MWC 2017. But seeing as this Moto G5 Plus is similarly specced to the Moto Z Play, the lack of modular support is a let-down.