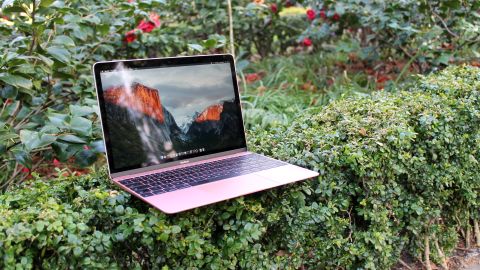 Intel's Core M processor has, perhaps unfairly, earned itself a poor reputation since sliding under the bonnet of the Yoga 3 Pro back in 2015. The Yoga and other early machines that adopted Intel's fanless processor (ironically, the Yoga 3 Pro wasn't fanless) were sluggish and the performance hit wasn't considered worth it to get hold of their sleek new designs.

However, successive generations have seen Core M's performance increase to the point that you often wouldn't be able to tell whether a laptop houses a Core M or Core i-series processor, depending on what it is you're using it for.

Unfortunately for the 2015 MacBook, the Core M processors inside weren't powerful enough to provide a smooth experience under OS X 10.10 Yosemite. I found that disabling transparency effects and animations, while taking care not to open too many apps at once, was vital to prevent applications from temporarily freezing.

So how does the refreshed MacBook fare?

Here's how the MacBook performed in our suite of benchmark tests:

For comparison, here is the performance of the entry-level MacBook, configured with a 1.1GHz Intel Core m3-6Y30 processor clocked at 0.90GHz (Turbo Boost to 1.1GHz), Intel HD Graphics 515 and 8GB of 1867MHz memory.

The good news is that the spec bump has turned the MacBook into a machine that runs much efficiently under more stress. I tried both the entry-level and the mid-spec version, and found that both machines provided a smooth experience out of the box without any tweaking of OS X 's settings.

Running my usual load of office applications, which includes multiple Firefox browsers, GIMP image editor, Skype, Evernote, Filezilla, Wunderlist, Ulysses, Slack, Echofon, Reader and Spotify (they're all essential, alright?), the MacBook didn't so much as stutter. I still wouldn't be confident opening another few FireFox windows and loading 30 tabs into each of them, but that's more of a criticism of the browser than it is of the MacBook's performance.

The 2,304 x 1,440 pixel-resolution display remains one of the best I've seen on a notebook, and is the best on a MacBook. It brings incredibly rich colors and excellent 170-degree viewing angles.

There's another advantage: you can scale it up to get more desktop space and go far beyond Apple's default scaled resolutions. By adding a custom resolution, I managed to soar all the way up to 1,920 x 1,080 in High-DPI mode using SwitchResX, which allowed me to see the same amount of spreadsheet rows and columns as a 27-inch monitor. Sure the text was tiny, but I could still make out the numbers and edit the spreadsheet without any trouble.

I might not be doing it all the time, but compared to my old setup, which was an 11-inch MacBook Air connected to a portable USB DisplayLink monitor, I now have enough desktop real-estate to switch to see more on the screen at the same time. That's been possible on high-resolution Windows and Apple machines for some time, but having all that desktop space is even more impressive on a 12.1-inch machine as thin as a pencil.