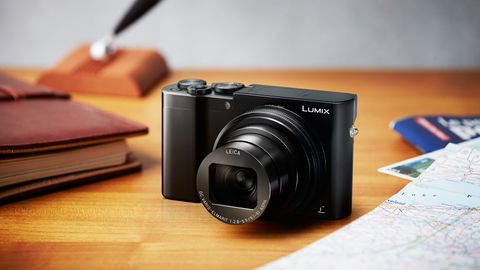 The Lumix ZS100 (known as the Lumix TZ100 outside the US) is a big step forward for Panasonic's travel cameras, and brings an interesting new proposition into the one-inch sensor market – a pocket-sized camera with a 10x zoom range. For many, this might be the perfect compact camera.

Panasonic entered the digital camera market in 2001, and in 2006 produced the first of its popular ZS range (TZ outside the US), a series of cameras with a small body and a large zoom range designed to appeal to travellers.

It's safe to say that in the 10 intervening years, lots of advancements have been made, many of which Panasonic itself has been first to introduce. ZS / TZ cameras have proved a big hit over the years, and with the shift towards more high-end features in compact cameras, Panasonic has now raised its game with a new model, the Lumix ZS100 / TZ100.

The most noteworthy change that the ZS100 / TZ100 brings is the move from a 1/2.3-inch sensor like the unit found in the ZS60 / TZ80, to a much larger 1-inch type device with 20.1 million effective pixels. One inch sensors have become very popular in the past few years, first with Sony's RX100 range, and more lately, with Canon's latest G series compact cameras.

A 1.0-inch sensor immediately raises the ZS100 / TZ100 above the level of many other rival travel cameras. It's the same same sensor as is found in Panasonic's top-end bridge camera, the very successful Lumix FZ1000. In the ZS100 / TZ100, it is combined with a new Venus Engine processor and a Leica DC Vario-Elmarit 25-250mm f/2.8-5.9 zoom lens. There's also Panasonic's Power OIS stabilisation system for stills photography and 5-axis hybrid OIS stabilisation for video.

Despite the increase in pixel count over that of last year's ZS50 / TZ70, the fact that the sensor is 4x larger in the ZS100 means that the pixels are 2.4x bigger, which should be very good news for image quality and noise control in particular. This has given Panasonic the courage to give the ZS100 a native sensitivity range of ISO125-12,800, and there are also expansion settings of ISO80, 100 and 25,600.

The 10x optical zoom means that Panasonic is describing the ZS100 as belonging to an entirely new sector of the travel compact market – premium superzoom. All of the other small form (pocketable) one-inch sensor cameras are limited in their zoom range, so it's quite exciting to see the company coming up with a camera which should appeal even more to travelling photographers.

Given Panasonic's enthusiasm for all things 4K, it's no surprise that the ZS100 has 4K recording capability (at 30 or 25 frames per second) and 4K Photo modes are present to make it easy to shoot 8MP still images at 30 frames per second (fps). There's also Panasonic's latest addition to the 4K fold, Post Focus mode. In this mode the camera takes a sequence of images with different focus distances and you can choose the shot in which your subject is sharp post capture.

In addition, the ZS100 has 4K cropping which enables the composition of 4K footage to be improved and down-sampled to Full HD in-camera.

Viewfinders are making a welcome comeback to compact cameras and the ZS100 / TZ100 has a 0.2-inch, 1,160,000-dot electronic viewfinder built-in to make it easier to compose images in bright ambient light. Naturally this is accompanied by a larger screen on the back of the camera, and in this instance it's a 3-inch 1,040,000-dot unit that is touch-sensitive. Helpfully there's an eye sensor to detect when the camera is held to the eye to switch off the main screen and activate the EVF.

Another cherry on the specification cake is the fact that the ZS100 can record raw files as well as JPEGs. This sits well with the aperture priority, shutter priority and manual exposure modes that accompany the automated shooting options. Also, the shutter speed may be set to 60-1/2000 secs when the mechanical shutter is in use or 1-1/16000 secs with the electronic shutter. It should therefore be possible to freeze very fast movement and use the widest aperture in bright light.

Interestingly, although Wi-Fi connectivity is present, NFC technology is not – Panasonic says that this hasn't proved as widely used as expected. In terms of competition, the ZS100 goes up against the latest one-inch compact cameras from rivals Sony and Canon, including the RX100 IV and the G7 X Mark II – but neither feature such extensive zooms. Arguably, therefore, the ZS100 doesn't currently have any close competitors.