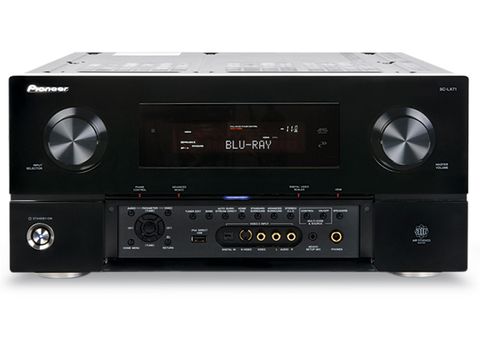 A beautiful, digital powerhouse of an AV receiver, the AIR Studios-tuned SC-LX71 packs in just about every AV feature known to Man – and then some.

But it doesn't have a front panel HDMI input (soon to become essential, in my opinion) or the step-up LX81's two HDMI outputs that allow both flatpanel TV and projector to be connected at the same time. It also lacks a DAB tuner – the onboard radio is AM and FM only.

But fret ye not – Pioneer has gone one better than DAB with its internet radio tuner. This can sound better than our digital radio system, and a larger choice of stations is also thrown into the bargain. The streaming media client will play audio files and digital photos but there is no support for video files of any persuasion.

That said, it's the SC-LX71's AV and surround capabilities that are most of interest here. Among the wide selection of AV inputs are four HDMI ins, three component, 7.1 analogue in/out and the ability to connect a turntable! The machine also gives you a serial port (for display of MCACC information on a PC) and a couple of 12V triggers.

The SC-LX71 will itself decode high-res audio formats like Dolby TrueHD and DTS Master Audio. Naturally, there's also support for the various flavours of Dolby Digital, and DTS, including Pro-Logic IIx 'movies' and 'music' modes for two-channel sources.

The MCACC implementation employed here is the latest 9-band type; as with previous incarnations, it relies on placing a (supplied) microphone in the listening position and letting the Pioneer do its thing.

Other sonic trickery includes compensation for phase cancellations/additions and unwanted standing-waves caused by speaker/room layout, plus a front-channel bi-amplification mode and an 'advanced sound retriever' for maximising the potential of compressed-audio sources.

I started my audition with music, and found that, for a complex über-digital beast guaranteed to give hi-fi purists nightmares, this amp combines weight, speed and detail to deliver a damn satisfying listening experience.

Switching to surround formats on a wide variety of DVD and Blu-ray movies, and detail remained audible in the mix even during the most explosive of sequences, as the deluxe Blu-rayed horror of Full Metal Jacket's Vietnam amply-demonstrated. Complex scenes like this also showed off to explosive effect the SC-LX71's sound-staging properties – the frenzied military-transport movements and ordnance trajectories were recreated with unnerving accuracy.

In brief, Pioneer's SC-LX71 bristles with serious sonic abilities, and if you're in the market for an upper-midrange AVR with a touch of class then it will definitely appeal. However, the absence of a secondary HDMI output may deter some buyers at this price point, as might the Select2 rather than Ultra2 THX certification. For those added sprinkles, you'll want to have a shufti at the award-winning SC-LX81 model.