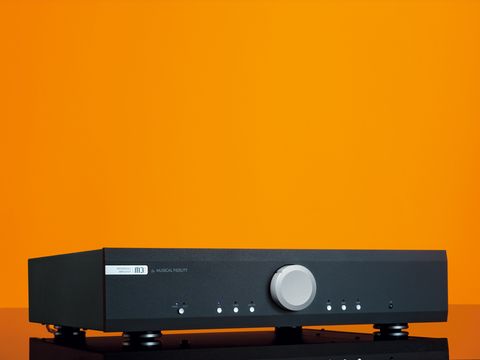 Over the last fifteen years, Musical Fidelity products have literally come in all shapes and sizes. They have sported both extremely high and comparatively low power outputs and frequently mixed a variety of valves into the mix.

This has, of course, resulted in a number of interesting products, all of which incorporate design thinking from the flagship Titan power amplifier.

The M3i tested here is the entry level, full-width Musical Fidelity amplifier and it finds good company in the matching M3 CD player. It's also a styling match for the new M1 DAC, if you have moved beyond CD for music replay.

The M3i pitches into the keenly contested £1,000 amplifier market with a relatively conventional specification.

Unlike MF's rather pricier AMS units, which are entirely Class A, the M3i retains a Class A preamp stage, but the output stage is class A/B, which is a more practical proposition at this price point. This arrangement gives a claimed 70 watts per channel and in use seems unfazed by any remotely normal speaker load.

This is due, in part, to the customary care that Musical Fidelity has paid to the power supply of the M3i. The preamp section has its own power supply with separate transformer windings, effectively separating it from the power amp section. The transformer itself gives the M3i good current reserves and contributes to the ease that the M3i sets about most speaker loads.

The M3i sports six line-level RCA inputs, one of which can be switched to act as a fixed input should you wish to use the M3i in an AV system. The balanced input and USB input of the larger M6 are lost, which is shame but understandable given the M3i is less than half the price.

The good news is that the M3i retains the sturdy, all-metal casework of its bigger brother (albeit in a slightly smaller size) and less the external heat sinks. As such it joins the new Musical Fidelity aesthetic that we, at least, think is rather handsome. The fit and finish is good – the all-metal casework feels sturdy and the controls are solid.

Round the back, the connections are gold-plated and well spaced, while the speaker terminals are solid enough to accept heavyweight cabling without baulking.

The M3i is also fully remote controlled, with both volume and input selection being available from the handset, as well as controls for the matching CD player. The handset itself is not the last word in elegance, but it is logically laid out and is easy to use.

A slight gripe is that the motor in the volume pot is not especially fast, so quick changes in volume are better done by hand. The result is a solid proposition at the asking price.

It is possible to find more highly specified amplifiers for the same money – internal phono stages are available, as are balanced inputs, USB or other digital connections and more power.

While, the M3i does not have these features, it retaliates with solid internal engineering and sturdy build. The power output is unlikely to constrain your choice of loudspeakers, or require you to change existing ones and the six line inputs and AV bypass ought to allow it to slot into most hi-fi or AV systems without a problem.

Ultimately, the decision on whether this is sufficient will rest on any requirement you might have for the features that the M3i does not have. It is also worth considering that elsewhere in the range, the very competitive V Series components can give the M3i, digital inputs, a headphone amp or a phono stage for a small increase in cost.

Of course, we would always encourage that any purchasing decision of this type be reached with the aid of a demonstration and should you do this, the case for the M3i grows rather stronger than from the specification alone.