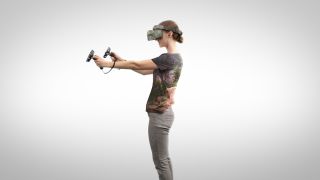 If you are the proud owner of a Windows Mixed Reality headset, do we have some good news for you. Valve has announced that you can now use the virtual reality headsets to play VR games in Steam.

What’s even better news is that at the moment, the software that is needed is being provided totally free as an Early Access preview.

The reason that it’s a preview rather than a full launch is that there are still bugs that need working out and Microsoft is wanting to involve the Steam Community in identifying the issues before a full launch:

“Windows Mixed Reality for SteamVR is currently targeted at consumers who want to be first to try out their Steam titles on Windows Mixed Reality. There are some known performance and experience issues that we are actively addressing. Early feedback will help spot new issues with a breadth of content."

The post continues: “We're eager to gather your feedback during this early access release to make the full release of Windows Mixed Reality for SteamVR a smashing success. If you run into any issues during Early Access please provide feedback through the Windows Feedback hub or through the Community Hub here on Steam.”

If you’d rather not be involved in the testing, or you haven’t yet got your Mixed Reality headset, don’t worry, Valve has stated that the software will remain free once it launches properly.

Given the vast quantities of Windows Mixed Reality headsets hitting the market at the moment, it will be interesting to see the effect that this integration has on the amount of users taking up VR gaming.