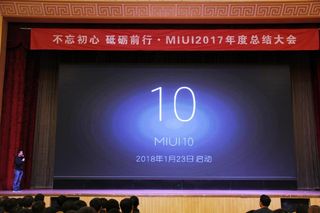 Xiaomi has announced the development of next version of company's custom ROM based on Android. The upcoming firmware will be called MIUI 10. The announcement took place at Xiaomi’s annual assembly meeting held on 23 January in China, where Hong Feng, co-founder and VP of Xiaomi shared details on new ROM.

To recall, Xiaomi had recently released MIUI 9.2 for devices running MIUI 9. Also, the company released a list of 40 Xiaomi devices that are are eligible to be updated to MIUI 9. Since Xiaomi doesn’t have all 40 phones in its portfolio in India, the list cuts down to fewer devices.

The MIUI 9 focuses on providing better battery optimisation, stability and speed. Hong Feng said that company’s focus this time will be on bringing AI and machine learning features to the next version of their software. This comes at a time when biggies like Apple, Huawei and Google have set their feet in this domain.

The MIUI 9.2 comes with several upgrades like Add to favorites icon adjustments, simplified design for virus scan result page, and hiding free and incompatible themes in the list of the purchased items. Moreover, the existing Mi Mover app now supports restoration of data while migrating on a new phone even if there’s an interruption.

The new version of MIUI will be rolled out to existing and upcoming devices, but there’s no official date given by the company yet.