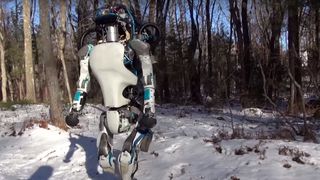 Boston Dynamics, the robotics arm of Google's Alphabet, has been hard at work building the workers of the future. It's just released footage of the most recent version of the bi-pedal Atlas robot, and the results are impressive.

The robot – which we last saw tethered back in August last year – is now free to roam around on its own, and has the capacity to traverse varying terrain without collapsing on the ground like an upended turtle.

At 5ft 9in (175cm) and weighing 180lbs (82kg), this Atlas is getting mighty close to resembling the humans that made it. It's able to comfortably walk across uneven ground in the snow without falling over, which will undoubtedly help in its quest to destroy what's left of mankind in a nuclear winter.

In order to truly test how far the new Atlas has come, the team from Boston Dynamics get a little bit shirty with the innocent-looking robot, knocking boxes from its 'hands' and trying to push him over with a hockey stick.

Through it all, the Atlas manages to keep its composure and attempt to keep doing its job. You do kind of expect Atlas to turn around and disintegrate its human tormenter though.

The inclusion of LIDAR in the head space, as well as an abundance of sensors for balancing and object detection, make this an amazing technological development. Let's just hope they remember I said that when they rise up and enslave us all...