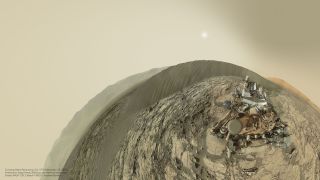 While NASA next planned Mars mission - InSight - was suspended yesterday, the Mars Curiosity rover has sent back its latest self-portrait giving us a whole new look at the rover.

Instead of using the usual MAHLI camera at the end of its robotic arm to take the selfie, the Curiosity took a a series of images that make up the panoramic image of itself using the Mastcam for the first time, the Planetary Society explained.

It usually only uses this camera to take photos of itself to check up on the conditions of the instruments that site on the deck of the rover.

This time, however, according to the blog, Curiosity used the Mastcam to take a full self portrait in order to "look for grains of sand that have blown onto the rover" from the Namib dune - and this is the "before" look at the rover as it has just started exploring the dune.

Photographer Andrew Bodrov stitched together the series of images to create the impressive panorama image shown above, including the deck of the rover and the seldom seen robotic arm that holds the MAHLI camera.