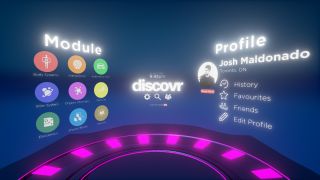 When you cast your mind back to the days of school, you probably think of dusty textbooks, graffiti and chewing gum, lessons that were both boring and unengaging, and many, many chewed pens.

But the classroom of tomorrow will look very different. The latest advancements in technology and innovation are paving the way for an educational space that's interactive, engaging and fun.

The conventions of learning are changing. It's becoming normal for youngsters to use games like Minecraft to develop skills such as team working and problem solving, and for teachers to turn to artificial intelligence to get a better understanding of how their pupils are progressing in lessons.

Virtual reality is also introducing new possibilities in the classroom. Gone are the days of imagining what an Ancient Egyptian tomb might look like - now you can just strap on a headset and transport yourself there in a heartbeat.

The potential for using VR to teach history, geography and other subjects is incredible when you really think about it - and it's not the only tech that's going to shake things up.

As mentioned, virtual reality is already starting to have an impact on education, with headsets like the Oculus Rift, Samsung Gear VR and HTC Vive helping to make learning more immersive and fun.

Toronto-based tech startup Discovr Labs is one of many firms that want to bring new opportunities to schools and colleges through the power of VR.

Founded in January 2015, it's already created VR training solutions for healthcare education programs at several hospitals and universities in Canada, along with a tour guide app of King Tut's Tomb for Gear VR and Steam.

Even in these early stages, the company has been noticing profound benefits when it comes to education. Based on the products it currently has in its portfolio - which also includes a VR training app for trainee doctors - Discovr says it has seen an 80% increase in subject retention when compared to more traditional teaching methods, such as reading from a textbook.

But this is just the start of great things for the firm, as it has even bigger ambitions for the future. With the aim of empowering instruction and discovery in VR, the Discovr team is currently developing a cross-device VR education platform where educators can create content and where students can access it. Still in creation, it's expected to launch later this year.

Josh Maldonado, founder of Discovr Labs, sees VR as the future of education. He tells TechRadar: "VR is helping to bring the concept of experiential learning to the forefront. Prior to VR, experiential learning was an afterthought, a treat for students. Today, we can immerse students in the subject matter as opposed to having them to a detached from the content through lectures and readings.

"In addition to shaping the classroom for tomorrow, VR has the potential to be the classroom of tomorrow itself. Social VR in the context of education has tremendous benefits and offers a more intimate learning experience with subject matter experts around the world."

One of the main attractions of VR for learning is the fact that it increases student engagement, but as Maldonado points out, the potential is also big for teachers.

"From an educator's perspective, teachers now have a greater degree in versatility and ability to personalize the learning experience. They believe it can help students improve understanding of learning concepts and collaborate in the classroom," he says.

AI to the rescue

Artificial intelligence is already doing groundbreaking things in areas like robotics, computer science, neuroscience and linguistics, but now they're now entering the world of education too.

London-based edtech firm Digital Assess has been working on an AI app that has the potential to revolutionise the way youngsters learn.

With the backing of the UK Government, the company has been trialling its web-based application Formative Assess in schools in England.

Using semantic indexing and natural language processing in a similar way to social networking sites, an on-screen avatar - which can be a rubber duck or robot - quizzes students on their knowledge and provides them with individual feedback on their work.

Educators are also engaged with the technology. Before the student actually uses app, a teacher has to log a number of tasks into the system. Once that's done, it'll automatically assign questions and concepts to the children.

The teacher is able to track their progress so they can step in if a student is struggling and needs additional support.

The firm has just finished the initial testing phase of the app and is reporting an 85% accuracy rate. It's now working on an improved version of the AI, which will be rolled out to even more schools around the country.

Dan Sandhu, CEO of Digital Assess, explains that his company has been working with teachers directly to ensure it is able to work effectively in the classroom. He believes AI can unlock masses of potential in this area.

"Assessment is one of the fastest growth areas in education technology. Technology has the power to not only increase fairness, accuracy and reliability in the way pupils' skills and competencies are assessed, but also to better enable teachers to support student learning."

Professor Richard Kimbell, one of the researchers on the project, says the aim of the project is to get students thinking more carefully about their studies more and to open up their imagination. This, he believes, is groundbreaking for education.

"We seek to open up students' thinking by posing questions that provoke them to stop and think. A framework of questions and student responses links together into a conversation and the intelligence is tuned to select the most appropriate next question," he says.

"It won't be one that channels them to any right answer, but rather one that opens up another possible line of thinking. We are using AI to stimulate students' imagination and independence."

When it comes to using technology as a tool to revolutionise learning, for many there's a focus on creating experiences that students will find fun. The way they see it is, if students find their lessons boring, then they're not going to want to learn at all. So gaming is an obvious solution, right?

Enter Minecraft. Having recently topped 100 million sales worldwide, it's fair to say the game has proven to be a smash hit and with the average user aged between 11 and 15, you can see why educators are interested.

Since Microsoft bought Minecraft's Swedish creator Mojang for $2.5bn (£1.8bn) in 2014, the game has gone on to be used in 7,000 classrooms around the world. Considering how high the demand is, last year the American tech giant went one step further and acquired MinecraftEdu from TeacherGaming, an independent developer based in Finland.

To unlock the opportunity here, Microsoft been making a host of improvements to the original MinecraftEdu app and has launched an official Education Edition. Available as a free early-access version for teachers, the full version of the game is poised to be released at some point in September.

New features include the ability for users to take photos of their progress, create notes and books and bring a free copy of the game home with them. There's also an additional classroom user interface, which teachers can use to gain an insight into how their students are using the platform.

To add even more functionality, teachers can add mods. For example, Q Craft introduces students to the field of quantum physics, while ComputerCraft will teach computer programming. Galacticraft, meanwhile, lets users explore the solar system in a Minecraft spaceship. The possibilities are seemingly endless right now, and youngsters are able to have a lot of fun by customising the game.

"Much like the game Minecraft, Education Edition is designed to be a versatile and open platform, but in a way that can be used to teach all types of subjects, from math and physics to history and language arts," Microsoft writes in its description of the game.

"By utilizing the digital platform and classroom experience, students can also develop skills in collaboration, problem solving, communication, digital citizenship, and more. There is no limit to what students can learn in the game, and no limit to how the game can extend classroom learning."

With new technologies on offer, Education is in an exciting period of change. Teachers are using tech to make the learning process more interactive and fun for students, and the benefits are already showing.

Virtual reality is letting youngsters explore the world without leaving the classroom, while AI is helping teachers create more effective curriculums. Games like Minecraft, on the other hand, are inspiring creativity and teamwork. These may only be a few examples of new tech, but together, they're creating a more modern, innovative classroom.