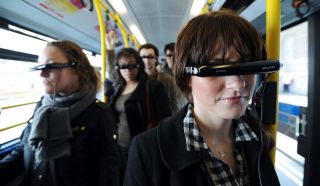 Augmented reality takes to the skies

The first race between humans flying real planes and computer pilots in virtual aircraft has resulted in a narrow victory for meat-based aviators.

The human pilots were flying in the skies above Spain, while their virtual opponents were piloted by land-based PCs.

The stunt pilots could see the digital aircraft on cockpit screens, while the position and speed of the real planes were fed into the aerial simulation on the ground.

At speeds of up 250mph, the fleshy fliers trounced their digital rivals by a margin of just 1.5 seconds.

The race was organised by the Geospatial Research Centre (GRC), a joint venture between universities in Nottingham and Canterbury, New Zealand.

They merged an electronically-generated environment with the real world using a combination of GPS sat nav and inertial navigation technologies.

Dr David Park of GRC, said: "The high G-forces and extreme manoeuvres of the aerobatic aircraft make this a very challenging technical problem. Inertial navigation constantly tracks the aircraft, while GPS signals are used to correct the INS errors — although getting a GPS signal isn't always easy as the aircraft twists through the sky."