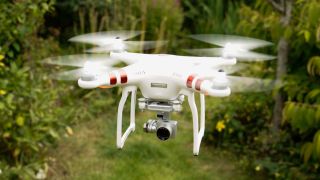 A DJI Phantom 3 in action.

Personal drones are some of the hottest gadgets of the moment - but how do drone makers ensure their customers aren't flying drugs into prisons, illegally spying on their neighbours or interfering with manned aircraft?

Geofencing software seems to be the best idea we have right now: code built into the drone that identifies its location and prevents pilots from flying the unmanned aerial vehicles somewhere that they shouldn't.

Now Chinese manufacturer DJI has pushed out a beta version of a geofencing system that it hopes will keep drones away from airports, military bases, protected wildlife spots and so on.

Right now the beta software is an optional upgrade for its Phantom 3 and Inspire 1 drones, though a full and release is expected soon. The new update can be downloaded direct from the DJI website and the feature is likely to be integrated into all future models.

"Users will have access to live information about areas temporarily restricted from flight due to forest fires, major stadium events, VIP travel and other changing circumstances," says DJI. "The system will also show restricted areas around locations like prisons, power plants and other sensitive areas where drone flight would raise non-aviation security concerns."

It is possible to unlock certain regions if you're a verified user - in other words, if DJI knows who you are and can hold you accountable for any dangerous drone flying you might partake in. Some high-security areas, such as Washington DC, can't be unlocked at all.