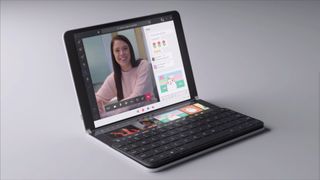 It looks like Windows 10X could run regular Windows applications, which is good news for anyone who wanted to run popular Windows 10 programs on their dual-screen devices.

A leaked document suggests that Windows 10X will support Win32 apps. This is noteworthy, as it’s the first time we’ve seen mention that Windows 10X, which is a special version of Windows 10 designed to run on dual-screen devices like the upcoming Surface Neo, could be able run regular Windows 10 apps.

Microsoft has in the past released 'special' versions of Windows 10, like Windows 10 S, which are limited to only running certain apps (such as UWP apps from the Microsoft Store), so the fact that Windows 10X may not have those restrictions – allowing you to run your favorite applications without worry – is welcome news.

Of course, this doesn’t mean Windows 10X will definitely be able to run every Windows 10 app in existence. The reference to Win32 app support is only brief, and appears in leaked documentation which has since been deleted.

According to Windows Latest, which has published the latest leak, the document states that “Office – Co-existence of Win32 apps and PWA (Progressive Web Apps) on Santorini; related to Shellification efforts.”

Now, that might seem like a lot of jargon, but what it could be suggesting is that Windows 10X (codenamed Santorini) will come with PWA versions of Microsoft Office applications – however, you could also download and install the full Win32 versions if you’d like.

As a previous rumor suggests that Windows 10X will also run on regular laptops, as well as dual-screen devices, the ability to run regular Windows 10 programs would be most welcome. Let’s hope this leak turns out to be correct.