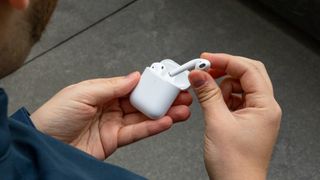 Update: This Apple AirPods deals is still available (no it didn't sell out like some sites were predicting), however, it is a bit backordered until next week. However, the actual AirPods deal is still in place, so you'll save money in any event.

Confession: I bought the Apple AirPods 2019 on Amazon Prime Day, even though I technically don't need them. After all, I have the original AirPods from late 2017.

There are several reasons I made the purchase, after much pondering. Sure, it has new features like touchless 'Hey Siri' and wireless charging. But the perks that swayed me to upgrade are all minor in comparison.

Here are the three reasons I bought new AirPods, and how much I paid for them during Prime Day 2019.

I've been waiting for Amazon Prime Day 2019 to roll around to buy a lot of things. I mean I've been rationing supplies like trash bags, laundry detergent, and even heavy duty sponges – all on sale and finally bought today. I need new sunglasses, but I didn't get them until today either. I've saved $50 on supplies in the end.

Note in the US: I saved an extra $9.01 by choosing No-Rush Shipping option. Amazon may be doing this for two reasons: AirPods are going to be very popular today, and everyone from Amazon employees and UPS drivers are going to overloaded shipping everything else sold over the course of the next two days. It gives them a reprieve from getting a popular item out to you. To Amazon, that must be worth $9.01.

The upgraded AirPods 2019, without wireless charging, are also on sale today. They include the touchless 'Hey Siri' feature, and offer slightly longer battery life.

US Walmart: Apple AirPods (2019) with Charging Case $144.99 at Walmart
You can save $14 on Apple's latest-model AirPods at Walmart. That's the best price we've found for the truly wireless earbuds, which come with a charging case.
View Deal

UK Amazon: Apple AirPods (2019) with Charging Case £ £154.20 at Amazon
In the UK, things are a little quieter in terms of Airpods deals – this is the best you're going to get at the moment – £5 off the usual price at Amazon.
View Deal

2. I'm selling my old AirPods while they have value

If I'm going to sell my AirPods, it has to be in 2019 for them to be worth anything. In time, the battery life will fail and audio volume will diminish. It's good enough for someone else to enjoy for another year or two (probably a family member since I wouldn't want to overcharge a stranger for something that has finite life).

I'm a big believer in getting rid of old tech to fund the purchase of new gadgets. It's how I funded the purchase of the iPhone XS Max, Apple Watch 3 and MacBook Pro. Advice: Get rid of things while they still have value attached to them.

My current AirPods from 2017 still last roughly four hours between charges, which is still impressive, in my opinion. It's longer than other people I've talked to are getting – several have told me about battery life issues.

Having a refreshed battery life that goes a full five hours between charges will give me exactly what I need on longer cross-country flights – and someone in my family will find four hours and, eventually, even three hours, just fine for their purposes.

Other smaller reasons I bought AirPods