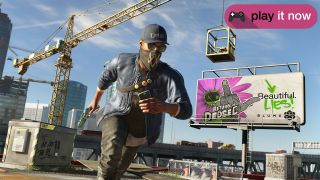 Setting a videogame in the murky world of hacking is quite brave in this day and age: real-life hackers, one suspects, wouldn’t constitute the most sympathetic and likable of characters.

So, with Watch Dogs 2, Ubisoft has taken a fantasy approach which doesn’t skimp on the comedy and requires a fair amount of disbelief-suspension.

If you can manage to stomach that conceit you’ll find a game which is very entertaining, has a big, seductive personality, makes some good points about big data and, in its virtual San Francisco, provides a great-looking, sprawling open-world playground that might not quite match the likes of Grand Theft Auto V but is definitely up there.

DedSec (but not dead serious)

Anyone who played 2014’s original Watch Dogs could be forgiven for approaching Watch Dogs 2 with caution. Thanks to its premise – the ability to hack anything in a virtual Chicago – it attracted a lot of hype, which it signally failed to live up to.

The main gripes levelled at it included a central character who was impossible to warm to, dreadful vehicle handling compounded by an overabundance of vehicular missions and that in general, despite its subject matter, it managed to be rather dull to play.

Ubisoft has certainly addressed those failings in Watch Dogs 2 (although the vehicle handling has merely been upgraded from awful to adequate).

This time around, you play Marcus Holloway, a young, Everyman-type character with preternatural hacking skills who frankly, despite his constant references to geek-lore, feels rather too cool and moralistic to be entirely convincing.

The same could be said of the crew of hacker organisation DedSec, which Marcus joins. They are all eccentric: crusty-looking graphic artist Sitara, Wrench who wears a mask that swaps his eyes for primitive emoticons and uses a voice-changer, Horatio who has a day job at Nudle (the game’s take on Google) and Josh, the master-coder who is on the Asperger’s spectrum.

At times, they do rather come across as a middle-class games developer’s idea of what a hacker would be like: none exhibit the Twitter-troll tendencies or conspiracy theory-obsessions that drive real-life modern hackers. To be fair, later in the game, you come across some much nastier rival hacker gangs, and the interplay between them throws up some pleasing moments. Basically, DedSec is a fantasy about what a benevolent hacking group might possibly be like, if such a thing existed.

Marcus has some really enjoyable skills, augmented by some great tech-toys. He’s agile, with the ability to free-run over obstacles, has a nicely developed stealth engine and a devastating melee attack performed with a pool-ball on a string.

His best toys are a radio-controlled jumper – which can be employed to hack items which must be physically interacted with – and a quadcopter. Both can hack into CCTV cameras – allowing you to jump from one camera to the other and thoroughly survey every inch of the surroundings you are invariably trying to penetrate – and the likes of gas pipes and electrical boxes, which you can use to deliver lethal or non-lethal shocks to any enemy who approaches them.

Marcus also has guns – he starts with a stun-gun, but can 3D-print real guns in DedSec’s headquarters – and what are effectively grenades that can either stun or explode. The latter can even be thrown onto the quadcopter and used to take out enemies who stubbornly refuse to go where you want them to.

Thus you can adopt a number of different play-styles. Marcus can sneak into places, taking out guards as he goes and avoiding security devices, which is quite high-risk, since alerted guards will summon reinforcements, and Marcus’s gunplay lacks precision. Or he can remain outside, sending in the RC jumper or quadcopter to do his dirty work. Most players, we suspect, will mix play-styles, according to the circumstances.

The main missions – which Watch Dogs 2 calls Operations – are multi-stage affairs, delivered in chunks, each of which builds nicely to a set-piece climax, often involving a recurring puzzle involving routing closed-circuit power supplies reminiscent of the retro classic Pipe Mania. They are pleasantly varied and pretty memorable – beyond the sneaking and hacking, Marcus must, for example, impersonate various people and send a hacked Knight Rider-style car careering through the streets of San Francisco to create video material for DedSec.

Pretty soon, side-missions proliferate, which are even more varied – and variable. Some are rather perfunctory, while others make arch references to old videogames. They are well worth completing, though, since they gain new followers for DedSec, and that feeds into the main mission.

Beyond the designated side-missions, there are countless other activities to perform: taking selfies at San Francisco landmarks, for example, or a clever take on Driver San Francisco (developed by Reflections, which handled the vehicle side of Watch Dogs 2) that casts you as an Uber driver. As the game progresses, a new mechanism emerges involving warring street gangs, which adds yet another layer of disruptive activities.

One of Watch Dogs 2’s best aspects is its willingness to take parodic pot-shots at all of Silicon Valley’s major players, corrupt politicians and even faddy churches like the Scientologists. The game’s chief baddie is the company Blume, whose ctOS operating system – already powering the city and making inroads into private houses – is harvesting intrusive amounts of data, enabling the company to make a killing. Blume’s super-creepy CEO crops up frequently as Marcus’s nemesis.

Little vignettes constantly poke fun at the startup culture. For example, one mission sees Marcus driving a Nudle bus, with some wondrously clueless conversations taking place behind him. Watch Dogs 2 even takes an affectionate pop at Burning Man.

Wisely, Ubisoft has abandoned Watch Dogs’ limp competitive multiplayer element. Instead, Watch Dogs 2 contains a number of two-player co-operative online missions, which are satisfyingly challenging and pretty much require a decent gaming headset, as they demand a tactically unified approach.

Watch Dogs 2 is unlikely to be entered into the annals as a great game, but it’s a very good one indeed – sufficiently so as to erase the disappointing memory of the first Watch Dogs. It has a great visual identity, some truly memorable missions, plenty of humor (which often tends towards the frat-house end of the spectrum – we spotted, for example, a Beavis and Butthead reference) and takes the mickey out of Silicon Valley and its denizens while making a serious point about the personal data which giant corporations are already insidiously harvesting from us.

It may, at times, put one somewhat in mind of dad-dancing, and some will argue that its idealistic protagonists don’t ring true. But it makes no pretence at being some sort of digital documentary and, above all else, its hack-anything gameplay is great fun to experience. It probably won’t dominate water-cooler conversations like, say, a new instalment of Grand Theft Auto, but it should keep us happily occupied while the winter sets in.

The game which everyone hoped the original Watch Dogs would be: entertaining, distinctive, clever and amusing – as long as you’re able to suspend disbelief.

Watch Dogs 2 was reviewed on PS4.

TechRadar's review system scores games as 'Don't Play It', 'Play It' and 'Play It Now', the last of which is the highest score we can give. A 'Play It' score suggests a solid game with some flaws, but the written review will reveal the exact justifications.