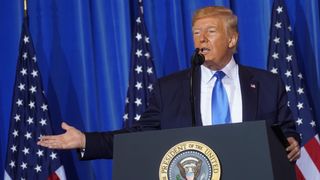 When you think of Huawei and U-turns you might think of the Huawei P30's notch, but now something else springs to mind – Donald Trump has softened his attitude to the Chinese telecoms company, so we could see the Huawei ban lifted soon.

Speaking at the G20 summit in Japan, Trump signalled a lifting of the ban on US companies selling to Huawei, at least in the vague verbal way Trump is wont to do – but it could signal the end of uncertainty around Huawei products.

"US companies can sell their equipment to Huawei," Trump stated, specifying "I'm talking about equipment where there is no great national emergency problem".

Since issues surrounding Huawei and spying haven't been resolved, that doesn't necessarily mean the US companies will leap at the opportunity to sell products, but it does show the end of the reactionary politics that defined the start of the Huawei ban.

It's not clear exactly which companies Trump was referring to in lifting the ban. "We have a lot of the great companies in Silicon Valley and based in different parts of the country that make extremely complex equipment - we're letting them sell to Huawei," he stated.

That could range from hardware companies like ARM which stopped working with Huawei, to the well-publicized Google Android ban  on Huawei phones.

When we asked Huawei for comment, it only stated "We acknowledge the US President's comments relating to Huawei yesterday and have no further comment at this time," which is the same statement it sent to other publications, and at time of writing Google had not responded to requests for comment.

Could the  Huawei Android ban be lifted?

It seems the answer could come soon, as Trump stated the Huawei situation will be a subject discussed with China during the newly-resumed trade talks. "We're going to work with China on where we left off," the US President confirmed, seemingly signalling the end to rising tensions.

We've passed the half-way point in the 90-day grace period the US Commerce department gave Google to work with Huawei, but this means that time could well be extended or the limit removed altogether.

While some companies cut off their relationships with Huawei after the US 'entity list' ban, several other companies like Intel and Qualcomm lobbied against the ban, stating it could cause huge damage to American companies.

It seems, therefore, like a quick answer would be preferable for everyone – not least of all Huawei, as the move has led to questions from consumers over whether its smartphones will be fully supported due to the US ban.

Currently, nothing's changed – but it's likely that Trump's quotes mark the end of deteriorating relationships between these various governments and companies, and we could see future Huawei phones run future Android operating systems after all.