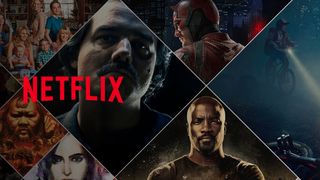 But choose we must, as this is the season of the World Cup and what better way to celebrate a tournament about football than using Netflix Originals as a substitute for football teams?

Okay, the link is a touch tenuous but we are sticking with it. Below is a list of the best Netflix Original shows and, according to our simulation (scribbled notes on the back of a e-cigarette packet), how they would fare in a World Cup tournament that consists of 32 teams (shows) where there can be only one winner.

Before you shout that your number one show isn't even on the list, then just remember that below are shows in the World Cup finals, there was many a qualification game to get here and series such as Making a Murderer and Gypsy made a short, sharp exit.

With House of Cards getting an instant red card early on in its first match, it was really only Dear White People left to try and usurp the might of Master of None and Sense8. Master of None outwitted everyone, however, with its, er, quick wit. While Sense8 made a sensational comeback which was unexpected but definitely what the fans wanted.

WINNER: The End of the F***ing World
RUNNER-UP: Marvel's The Punisher
13 Reasons Why
Love

With its 'don't give a f*** style of play, The End of the F***ing World topped its group with ease. The Punisher qualified a close second thanks to a brutal approach to its ball handling, leaving 13 Reasons Why in a perpetual state of teenage angst. Love, on the other hand, was too hipster to care about winning.

If drug tests were a thing at this World Cup then Narcos would have been swiftly disqualified. Instead it managed a respectable second in its group. It was Unbreakable Kimmy Schmidt that ultimately topped the group, though, thanks to sheer lovely optimism. The OA and Big Mouth never stood a chance – the latter was just plain embarrassing.

It was eery to watch how well Mindhunter got into the minds and under the skin of its opposition in this group. Santa Clarita Diet took a different approach, deciding to go for the jugular more times than we'd care to mention. Bloodline unfortunately didn't gel as a family unit and Easy was, er, too easy.

Jessica Jones was a deserved winner here, showing super strength on the pitch. Daredevil managed to sneak a couple of shots in, despite shooting blind for the most part. We have no idea what happened to Wet Hot American Summer - they were easily the youngest team on the pitch, but looked like a bunch of wheezing 40 year olds out there.

WINNER: Stranger Things
RUNNER-UP: BoJack Horseman
The Get Down
A Series of Unfortunate Events

Stranger Things turned their opposition upside down, using techniques rarely seen outside the 80s, while Bojack Horseman stayed stable right up into the final furlong. The Get Down disappointed in the second half of their matches and nothing seemed to go right for A Series of Unfortunate Events.

GLOW deserved to win for its kit alone but also managed to wrestle the opposition to the ground. Orange Is The New Black had to use a few 'get out of jail free' cards but took a respectable second place. Altered Carbon was style over substance but the biggest disappointment was Dark - it's a quality show and should have done better.

The Crown had a right royal rumble in its games, putting on a performance fit for a queen. Luke Cage's ability to smash through the defence proved fruitful but Ozark and Marco Polo promised much by dazzling at the beginning but then ultimately offered nothing that we hadn't seen before.

Unbreakable Kimmy Schmidt v Santa Clarita Diet
Brains beats unflagging optimism in what was one of the closest run battles so far on the pitch. Kimmy Schmidt looked like a surefire bet in the first half, with some fantastically flamboyant moves from Titus Andromedon but Sheila Hammond fought (and ate) tooth and nail to win the game in extra time.
WINNER: Santa Clarita Diet

Narcos v Mindhunter
The drugs wore off for Narcos in the end, with a 3-0 loss to the might of Mindhunter. We don't know quite how they do it, but they seem to lure the opposition into a false sense of security, get them to bear their souls then stick the knife in for victory. Narcos started off strong, though, with a false sense of self belief but whatever powers they had soon wore off and they were left a sniffly mess.
WINNER: Mindhunter

Jessica Jones vs BoJack Horseman
We don't know how this happened. Jessica Jones was sure of a place in the quarter finals, then in the last minute she completely bottled it and gave away a penalty. This gave Bojack the power to trot up to the spot and hoof one in. There was no cheering from Bojack and co, though, just a stare that seemed to last a thousand yards.
WINNER: BoJack Horseman

Daredevil vs Stranger Things
Who you gonna call when a game gets tight? Yep, you've guessed it Stranger Things. This one went into extra time but where Daredevil flagged in its second half, seemingly running out of ideas that didn't consist of magic and ninjas, Stranger Things admirably kept the quality levels high through both halves - and even managed to win despite getting a red card for that awful episode where they introduced the new kids.
WINNER: Stranger Things

GLOW vs Luke Cage
It turns out that despite a great hip-hop soundtrack blasting throughout the game and some impressive bullet-stopping play, Luke Cage sagged after half time, not quite sure what style it wants to play and the end result is a KO from the gorgeous ladies of wrestling. If only Cage had his super sub alias Jessica Jones to help him through, but alas he was on his own for this one.
WINNER: GLOW

Orange Is The New Black vs The Crown
One of the original Originals, Orange Is The New Black stood its ground for the majority of this game, proving to the world that age isn't an issue when it comes to taking on the new Netflix overlords. But, this is the monarchy and they like to get their way - even if their final goal should have been ruled offside. But who really has the guts to tell the queen that they made the wrong decision? No one, it seems.
WINNER: The Crown

Marvel's The Punisher vs Santa Clarita Diet
This was a marvel to watch. The Punisher gave his all, relentlessly pursuing the ball like it was the men who killed his family. But it wasn't enough. Even the strongest hearts are covered by weak flesh and that's exactly what Santa Clarita Diet went for, chomping through bone until there were only their feet left to kick the ball into the goal and the final whistle was called.
WINNER: Santa Clarita Diet

BoJack Horseman vs GLOW
Poor ol' Bojack, he has his ups and very much his downs. His heart wasn't in this one - two goals down after 30 minutes, he had checked out and checked into rehab, mumbling something about blaming Todd. This left GLOW to antagonise the crowd and woo them back again with their wrestling prowess.
WINNER: GLOW

Stranger Things Vs The Crown
All things must pass and monarchies must end but this was one of the more unusual ways. We haven't read all of the rulebook but subbing on a Demogorgon at the 70th minute certainly won Stranger Things the game - because there were so few people standing by the end. The queen held strong but was stretchered off after 80 minutes. Prince Philip was handed a red for foul and abusive language and we're certain he'll be fined for the words that came out of his mouth.
WINNER: Stranger Things

Santa Clarita Diet vs GLOW
The gorgeous ladies of wrestling just couldn't do anything right in the semi finals, until the 80th minute. Things started fall apart when one was given a foul for a rather nasty suplex. This was much to the annoyance of their manager who had spent most of the match powdering his nose in the changing rooms. But then a lucky punt from the halfway line duped the keeper and the ball went in. After that, Santa Clarita Diet had finally lost hunger for the game.
WINNER: GLOW

GLOW vs Stranger Things
Football, bloody hell. Nothing happenes in this game for an hour, then Ruth Wilder goes all Zoya The Destroyer and angers the opposition. This was followed by a sending off for the She Wolf, after she bit Dustin. This sent Eleven into a frenzy and she managed to score three goals with her mind 10 minutes from the end. GLOW tried to recover but they were soon out for the count.