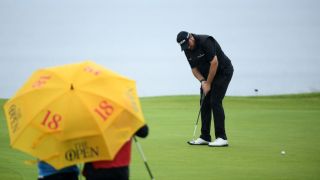 Shane Lowry may have one hand on the Claret Jug, but it's still going to take some nerve and skill to get around the gusty last few holes at Royal Portrush to win the 148th Open Championship. You can discover whether he can close it out with a 2019 Open live stream.

The players are continuing their hunt for the famous Claret Jug at the British Open Championship - the first time that the world's oldest golf major has been held in Northern Ireland in almost 70 years.

The beautiful Royal Portrush Golf Club right at the top of Northern Ireland will host the 2019 Open Championship.

Shane Lowry's astonishing 63 on Saturday means that he headed in to Sunday at the top of the leaderboard by four shots, with Englishman Tommy Fleewtood joining him in the final pair. A little way behind him were a clutch of Americans (J.B. Holmes, Rickie Fowler, world number one and Brooks Koepka) and more Englishmen (Justin Rose, Lee Westwood, Danny Willett).

If you don't yet know what your 2019 Open live stream options are, then keep on reading. It's FREE in some areas, which is great news for those wanting to watch the closing stages of the action at Royal Portrush.

The Open Championship is following the likes of the Masters and US Open, which means you can get a free live stream at TheOpen.com.

It is showing action from featured groups and featured holes 5, 6 and 7. There's even audio commentary to go with them.

That's great if you're only interested in following the players it selects for you, but not so good if you want full and proper coverage. Aside from the TheOpen.com live stream, we have more watching options below.

We're going to guess that if you've landed on this page, you're going to want something more extensive than that free Open live stream described above. For you, we have full details on which networks are showing the golf in the UK, US, Canada and Australia.

But try to watch your domestic Open Championship coverage while out of the country and you'll soon be faced with a block. That's because broadcasters implement a geo-restriction to stop non-nationals from watching their coverage. Fair enough, but annoying if you've paid for a pricey subscription and still want to watch without having to resort to some dodgy illegal stream you've discovered on Reddit.

If that sounds like your situation, then we'd recommend grabbing a VPN (assuming it complies with the broadcasters' Ts&Cs, of course). This software lets you change the IP address of your laptop or mobile to one in a different country, and therefore appear like you're back at home.

They're really easy to use, too - especially ExpressVPN, which is the best VPN of the 100+ we've tested. It also benefits from having speedy connections to faraway servers, watertight security and is compatible with Android, Apple, Roku, Amazon Fire TV, PS4 and loads more.

Express VPN comes with a 30 day money back guarantee so you can give it a try before you commit. Or you can get 49% off and 3 months FREE if you sign up for an annual plan.

It's worth bearing in mind that Virtual Private Networks like ExpressVPN are much more than just a way to watch sport while overseas. Loads of people now download them as a first line of internet security, thanks to their encrypted tunnels and anonymity online. VPNs are also popular for watching foreign Netflix catalogues and getting around blocked websites.

How to watch the Open Championship: live stream in UK

If you're a UK-based golf fan, you'll be well used to this by now. Sky Sports has all the Royal Portrush coverage on your side of the Atlantic. Head straight to the Sky Sports Golf channel, where coverage will run from 9am to 8pm BST. And if you're not going to be at home much this weekend, you can download the Sky Go app on your tablet or smartphone.

Don't have Sky and don't fancy subscribing just for the golf? Well Now TV may well be a decent fit for you. It costs £14.99 for a week's worth of access or £33.99 a month for even better value. And pretty much every streaming device you can think of has a Now app.

Not in the UK? Then you can always use a VPN to tap in to the broadcast from another location.

How to watch the British Open golf in the US

If you're at home and have cable, then NBC is the official broadcaster, and will be for more than the next decade after agreeing a 12-year deal starting a couple of years back. The Golf Channel is available from most cable providers as well and has comprehensive coverage of the event.

If you're outside the US this weekend but want to access one of the above options, then you can use a US VPN to effectively transport your computer, phone or tablet's IP back to a US location.

How to live stream Open golf in Canada

Cable channel TSN has the rights to show the Open north of the border in Canada.

Like most other broadcasters these days, there's a TSN app for watching on your mobile or tablet as well. But you'll need to use a VPN if you're outside Canada this weekend and still want to watch via the app.

How to get an Open live stream in Australia

Fox Sports has bagged the Open live stream coverage Down Under. The first players tee off at around 5.30pm AEST, so much of the action will be on overnight.

The Foxtel Now and Kayo Sports apps mean you can access this from your chosen device wherever you are (although you'll need a VPN if you're taking that abroad).

Where is the 2019 Open Championship?

The Open returns to Northern Ireland after 68 years with the world’s greatest players competing for the Claret Jug over the Dunluce Links at Royal Portrush.

Who are the favourites for the 2019 Open?

Playing in his home country, Rory McIlroy is looking for his second Open Championship and fifth career major victory and leads the betting with Betfair.

How much does the winner of the Open Championship get?

While The Open ranks last among golf’s four biggest tournaments in terms of prize money, the winner still picks up a sizeable payday. There’s been a slight increase over last year’s winnings, with the prize pool has increased this year to $10.75 million (£8.56m), whilst the winner will pocket $1.935 million (£1.54m).

Who qualifies for the Open?

It’s the golf tournament every pro golfer wants to Its play in, but there are only 156 places available. Players can qualify in one of four ways.

The most common for top-tier stars is through exemption. The top 50 players on the current Golf World Rankings all go through in this way, as do the top 10 players from the previous British Open Championship. All players who have won one of the other three majors in the previous five years also get an exemption, as do the top 30 players from previous year’s PGA Tour money list and those on the European Order of Merit. Finally, all previous Open Champions under the age of 60 also get an exemption.

Players that don’t make the exemption criteria can get an invite via the Open Qualifying Series (OQS), and also via local qualifying. Finally, if the field size has not reached 156, players that have the highest rating in the official golf rankings that haven’t already qualified will get the nod.

Who won the 2018 Open Championship?

Francesco Molinari won the 2018 Open, which was held at Carnoustie Golf Links in Scotland. The Italian finished 8-under to earn his first major title.