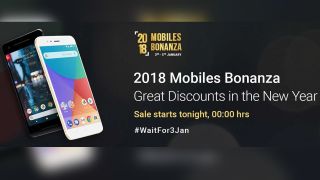 The online shopping portal is offering discounts on smartphones that range from bestsellers of 2017 to mid-range smartphones like the Moto G5. In addition, the company is also offering buyback guarantees, no cost EMIs and exchange deals on devices.

Top deals on smartphones on Flipkart

One of the best flagship smartphones available today, the Google Pixel 2 will be available at Rs 39,999, which is a massive Rs 21,001 off, while the Pixel 2 XL is down to Rs 64,999 from Rs 73,000. Both smartphones differ in display and design, keeping the internals same. They will be up for grabs starting midnight on January 3.

The most popular smartphones of 2017, the Redmi Note 4 will be available at a discount of Rs 2,000 during the sale, which is a good deal. Once a game changer in the mid-range segment, the Redmi Note 4 combines great hardware and software and is an all-rounder. If that wasn't enough, Flipkart's discount on the 4GB variant is something that you shouldn't miss.

Another one from Xiaomi that made an impact last year, the Mi A1 is the first smartphone from the company with dual-cameras. It is also a part of Google's Android One program, meaning it runs on stock Android software and will get the latest updates. At the time of writing this deal, the Mi A1 has become the first mid-range smartphone to be updated to Android 8.0 Oreo, which is a pretty big deal. It's also a better buy than the Redmi Note 4.

Honor released the Honor 8 Pro soon after the OnePlus 5 launch at a price point which is directly comparable. If there's any other competitor to the OnePlus's flagship, it's the Honor 8 Pro. From the camera quality to power, the Honor 8 Pro has all the qualities to be labeled as a good phone for Rs 25,999.

It of the most underrated mid-range smartphone launched in 2017. The Lenovo P2 comes in a metal clad shell that feels premium, has a full HD AMOLED display and an unmatchable battery life thanks to a 5100mAh battery. However, the still runs Android Marshmallow, but that's not everyone cares for until you have a decent experience with the device. For a price of Rs. 12,999, the Lenovo P2 is a good phone if multimedia consumption is your need.

People on a tight budget or those looking for a secondary smartphone, this one's for you. The Moto C Plus with 2GB RAM and 16GB internal storage is powered by a huge 4,000 mAh battery. It will be available at a discount of Rs 1,000 during the sale.

The Moto G5 Plus remains one of the better mid-range smartphones after the Mi A1, but during the Flipkart sale, the phone will be available at a discount of Rs 7,000, making its effective price Rs 9,999. Essentially, you get a mid-range smartphone at the price of an entry-level phone. Sounds like a good deal?

The best camera phone of 2017, the Pixel 2 XL is down to Rs 64,999 from Rs 73,000 during the Mobile Bonanza sale on Flipkart. Unlike the smaller Pixel 2, this one has a bigger body that means more real estate for the display and less for bezels. It runs the purest form of Android Oreo having the best hardware available on Android mobile platform right now. This temporary price cut is a golden chance to get your hands on the new flagship from Google, and yes, don't miss out the exchange discount.

The Galaxy S7 was one of the finest flagship smartphones of 2016. The phone sports the a sport camera, but doesn't have a curved display. The Galaxy S7 does not disappoint even when it comes to performance, so at this price, it's a win win.

Samsung is offering a Rs. 6500 discount on the 64GB variant of its Galaxy On Nxt smartphone. The device is selling on Flipkart for Rs. 11,999 as part of its Mobile Bonanza sale starting today. Looking at the overall specification, this the best value for money deal among all the Samsung On series phones.

AImed at the offline markets initially, the Moto M is a decent phone when it comes to software and design. But when it comes to performance and other aspects like display and camera, the phone lags behind the competition right now. If you are still loyal to Moto and can do away with mediocre performance and an average rear camera, you can certainly consider this.

Honor launched the 6X early in January before the Redmi Note 5 launch. This was the second mid-range phone to have a dual rear camera after the Coolpad Cool 1. If there is one phone that stood strong against the likes of Redmi Note 4 and Moto G5 Plus, then it's the Honor 6X. It has everything that a regular user would ask from a phone, excluding the bloated UI. If you need a cheaper alternative for a dual-camera phone, this is the best choice right now.

Samsung Galaxy On Max is an identical twin of the Galaxy J7 Max, which was launched back in June 2017. The presence of 4GB RAM, a 5.7-inch full-HD display, front flash, large aperture cameras, and Samsung Pay Mini support, are some of the reasons why you can consider this smartphone at Rs 13,900.