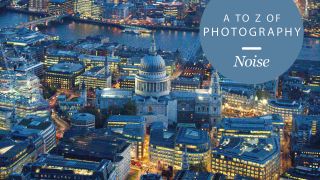 Noise is an unwanted, but sometimes unavoidable, side-effect of capturing digital images. It’s like the grain in analog film, or the hiss on old-fashioned audio recordings. It happens when the camera captures random background electronic signals alongside the image data itself, and it shows up as random, pixel-sized speckling.

The severity of noise in an image depends on a few different factors. Physically smaller sensors like those in smartphones or compact cameras are more prone to noise because the individual photosites, or pixels, on the sensor are smaller, and the amount of real image data captured isn’t massively greater than the background noise – in technical terms, they have a lower signal-to-noise ratio.

Noise also becomes worse when you increase the camera’s ISO setting, because you’re effectively just ‘turning up the volume’. Increasing the ISO doesn’t actually make the sensor capture any more light – the camera's electronic circuitry just amplifies whatever signal is captured. If you turn up the volume on an old audio recording the background hiss gets louder too, and it’s the same when you increase the ISO setting on a digital camera.

There's also something called ‘long-exposure noise’, which isn't related to the ISO setting. This is noise caused by a heat build-up in the sensor and circuitry during exposures of a few seconds or longer, for example in night photography. Many cameras offer ‘long-exposure noise reduction’, where the camera makes a second ‘dark frame’ exposure after the main exposure – this measures the noise alone, which is then subtracted from the main image. The drawback is that the overall exposure time is doubled.

Is noise really a big problem?

In bright outdoor lighting any digital noise is likely to be so faint that you just don’t see it. It’s only when you need to increase the ISO setting to shoot in poor light or indoors that it starts to appear.

Digital noise comes in two types: color, or chroma, noise and luminance noise. Color noise is where you get random color variations between pixels, creating a speckling effect. You don’t see it very much these days because it’s actually quite easy to process out without degrading the image, and cameras and image-editing programs tend to do it automatically.

Luminance noise is where you get random variations in brightness between pixels, and it’s much harder to deal with. Cameras and photo-editing applications do offer luminance noise reduction, but there's a trade-off in terms of image quality. The more you process-out luminance noise, the more you lose fine, textured detail, and in the worst cases you get an artificial-looking ‘watercolor’ effect, where the fine details are smudged out and the picture doesn’t look quite real. This used to be particularly noticeable in images from smartphones and cheap compact cameras, though manufacturers are getting better at finding the right balance between noise reduction and image quality.

There are plenty of software programs that claim they're better than any other at reducing noise, but we're yet to find one that doesn’t compromise detail rendition at the same time.

Occasionally you’ll get other types of noise that are impossible to eradicate – some cameras, at very high ISO settings, produce a faint banding effect or a faint, large-scale ‘blotchiness’ in the colors that’s impossible to remove.

What can you do about it?

The single most important thing you can do to reduce noise is reduce your camera’s ISO setting. In bright daylight that’s not a problem, but indoors or at night that means using a slower shutter speed, which brings with it the risk of camera shake. If you use a tripod, however, camera shake won’t be a problem.

It’s not always convenient to use a tripod, of course, but there are alternatives. Many lenses and cameras have image stabilizers that enable you to use slower shutter speeds without risking camera shake, and lenses with faster maximum apertures let you use correspondingly faster shutter speeds.

If you’re interested in low-light photography, and in the market for a new camera, keep in mind that bigger sensors generally deliver less noise at high ISO settings, although high resolutions can work against you. Sensors with a high megapixel count have smaller photosites, which produce more noise, so it’s all about finding a balance for the kind of photography you want to do.